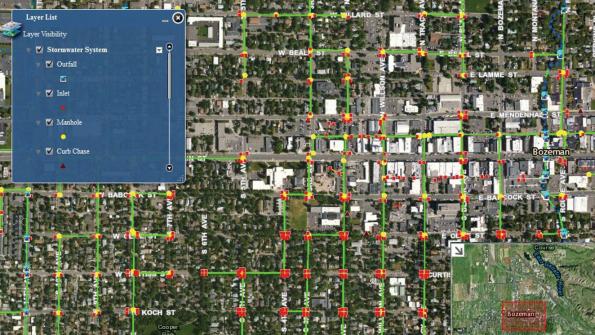 Mapping technology in the field and office has helped Bozeman, Mont., improve the visibility and management of its stormwater system.

Mapping technology in the field and office has helped Bozeman, Mont., improve the visibility and management of its stormwater system. “Out of sight, out of mind” could have described the city’s stormwater system for decades. That changed when the Montana Department of Environmental Quality audited Bozeman’s Public Works Department (PWD) and determined that the lack of a comprehensive stormwater system map was a violation of its federally issued MS4 (Municipal Separate Storm Sewer System) permit.

Consequently, the PWD launched a $200,000 stormwater-system-mapping project in 2012 to collect detailed, spatial-based data that could be readily integrated into operations. Nearly two years later, Bozeman’s GIS department has inventoried and mapped 95 percent of the city’s entire stormwater network, transforming stormwater from obscurity into a $1.2 million utility.

To prepare for the mapping effort, PWD developed a set of 13 unique stormwater data layers such as manholes, pipes and inlets, each with its own set of critical attributes. A two-man team, using Trimble GeoExplorer 6000 series GNSS handheld units, mapped more than 10,000 stormwater system features with 1-centimeter accuracy in several months, averaging about 200 features in an 8-hour day. They captured and described about 95 percent of the existing infrastructure including 93 miles (150 km) of pipe, 1,276 manholes and 3,059 inlets.

Using data from a nearby Trimble NetR9 GNSS base station and the company’s GPS Pathfinder Office software, the field data was processed and checked within an hour of its receipt each day and exported into the Esri GIS database. The resulting ArcGIS-based, interactive stormwater map offers a dynamic, layered blueprint of Bozeman’s entire network. The map is available to the public online. Map users can click on any asset feature and view its attributes. The new map is a productivity boon and communication tool for the PWD and the community. For example:

The mapping project has provided the factual platform to drive the expansion of the stormwater program. Using this complete inventory of the infrastructure and its condition, a 15-year, $1.2 million, multifaceted improvement plan has been successfully proposed.