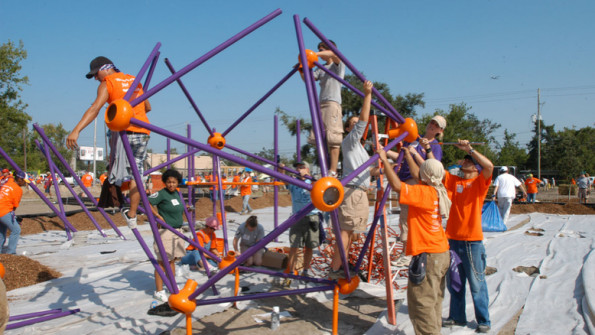 When natural disasters strike, it’s up to local leaders to rebuild. Streets must be repaired, homes rebuilt and schools reopened. But one municipal offering is often overlooked in the rebuilding process – parks and playgrounds.

When Hurricane Katrina decimated the gulf coast in 2005, KaBOOM!, a non-profit that helps build playground, particularly in impoverished areas, mobilized to help rebuild the regions parks and playgrounds, helping restore communities and childhoods.

Called Operation Playground and its surrounding campaign, KaBOOM! and its partners channeled more than $27 million and mobilized 43,791 volunteers to the Gulf Coast. As of April 2015, the effort constructed 174 playgrounds in the region, serving nearly 294,000 children, according to program materials.

As the 10-year anniversary of Katrina approaches, KaBOOM! released an impact study, available here. The infographic shows how play helped children cope with stress related to the destruction, how the program reinvested in impoverished communities and how the effort will evolve in the future.

“Each of us can be better neighbors,” said New Orleans Mayor Mitch Landrieu of the effort. “Just as strangers helped each other during the storm, we’ve got to always have each other’s back and build a community bonded by trust compassion and justice – one where our kids can play outside at night and our porches are full of laughter and stories shared by family and friends.”

Even a decade after the storm, Operation Playground is still going strong. KaBOOM! and its partners have planned several playground builds across the Gulf states that will run from April through August.

For more information, watch the video below of KaBOOM! Founder and CEO Darell Hammond speaking to volunteers at the 100th Operation Playground build in Bay St. Louis, Miss.