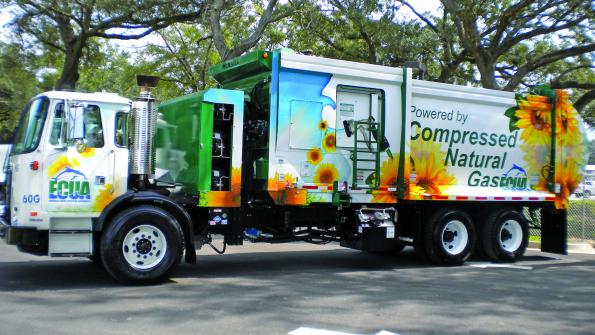 The two partners are growing the number of CNG vehicles in local fleets.

A partnership that’s the result of a mayoral initiative has formed between Pensacola, Fla., and the Emerald Coast Utilities Authority (ECUA), a regional water and sanitation utility. The two agencies came together to invest in and build the infrastructure for compressed natural gas (CNG) vehicles. CNG vehicles feature reduced emissions and less fuel and maintenance costs when compared to traditional diesel and gasoline vehicles.

In exchange for discounted natural gas from Pensacola Energy, the city-owned natural gas utility, ECUA partnered with Pensacola to build several CNG fueling stations throughout the metro area. Two of these stations are located at ECUA facilities. Together, Pensacola and ECUA are growing the number of CNG vehicles in local fleets and have begun reaching out to large national corporations to let them know the CNG infrastructure is in place.

Pensacola Mayor Ashton Hayward’s commitment to growing his city’s CNG infrastructure is based on national research that points to significant future growth in the natural gas industry. Eighty-five percent of new garbage trucks purchased across the U.S. run on CNG, as do 25 percent of new city transit buses, according to the American Gas Association. Pensacola is leading the way in Florida, with three CNG stations and one of the largest fleets of trucks in the Southeast running on CNG.

Continued spikes in diesel fuel prices and six years of intense research prompted ECUA management to make the switch to CNG. A supportive ECUA board gave Randy Rudd, deputy executive director of shared services, the go-ahead to purchase 50 CNG trucks in 2012.   It was a large investment, considering many other companies buy one or two CNG vehicles to start.

“We made the decision to jump in with both feet,” said Rudd. “We were confident in our research. The savings on maintenance and fuel costs were the swaying points. Do the math: three miles per gallon on diesel, 2,400 gallons every day at $3.30 a gallon. Or, 2,400 gallons a day on natural gas at half that price?”

Within the first year of fleet conversion and use of natural gas in 2012, ECUA reduced fleet operating costs by $1.1 million due to fuel and maintenance savings.  This past year, savings climbed to $1.3 million. “We’ve been able to drop the fuel surcharge from people’s monthly bills, and we’ve won additional business by producing the lowest bid due to our CNG investment,” added Rudd.

“What’s the saying? Build it, and they will come? Well, they are,” said Dena Faessel, administrator of operations for Pensacola Energy. Currently, national fleets including Frito-Lay, Seaboard Transportation, and AT&T are all traveling through Florida and fueling at Pensacola Energy’s CNG stations in Pensacola. Regarding CNG infrastructure, Faessel says, “There are plans for more. We never stop. We always have something in negotiations.”

Because the stations are public-private, trucking fleets can use them, and they fit the biggest rigs — up to 53 feet long. The stations are open 24-7. They are well-lit. They take major fleet cards, and they have on-call customer service 24 hours a day.

With all parties involved saving money and helping to improve air quality, Pensacola’s CNG partnership has become a model for cities across the nation. In the near future, Hayward hopes to expand the CNG infrastructure to Pensacola International Airport to serve companies like UPS. “I’ve already talked to the company, and they are excited about our infrastructure,” said Hayward. “We are creating a 21st-century city where businesses want to relocate or build because of the progressive steps we’re taking.”

Sara Daniel is a journalist and freelance writer in Pensacola, Florida.  A former government reporter and network news anchor whose stories have aired on National Public Radio and CNN, she now focuses on articles that highlight beneficial government partnerships.