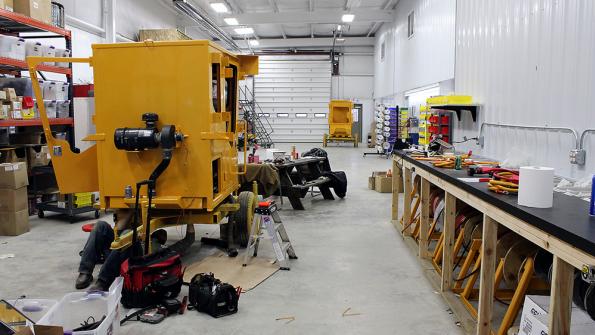 To keep up with increasing demand for its equipment, Bandit Industries recently completed the fourth plant expansion in nine months.

Remus, Mich.-based Bandit Industries recently completed the fourth plant expansion in nine months to keep up with increasing demand for its equipment. All the plant expansions add space for additional employees and increased production at the company’s mid-Michigan facility.

The company makes wood and waste processing equipment, including hand-fed brush and whole tree wood chippers, stump grinders, forestry mowers, horizontal grinders, and specialty yard equipment. The firm offers the Beast Recycler horizontal grinder that is able to recycle everything from wood waste to roofing shingles and other materials. The firm was founded in 1983.

Bandit moved into a new equipment rebuild facility in October 2014, increasing its capacity for rebuilding used machines. The move also freed up construction space in the forestry mower and Beast buildings, enabling the forestry mower group to double its production and allowing the Beast recycler line to increase production by 25 percent.

A new electronics facility was finished in November 2014, allowing for increased production of electronic control panel harnesses used on all Bandit equipment. The new facility is now assembling the control panels and proportional drives that are featured on all of Bandit’s Tier 4 engine options.

“In February of this year, we moved into a new facility to build drum chipper heads for our hand-fed chippers, whole tree chippers and Beast recyclers, along with the rotors for our forestry mower lines,” says Jerry Morey, president of Bandit Industries. “The new facility freed up production areas in our hand-fed drum chipper area, which is allowing us to increase production in that area by 50 percent.”

“These four expansions have allowed us to add 80 full-time employees and add much-needed production,” Morey says. “Surging demand for our products over the past two years has increased lead times longer than I like, and at times has cost us orders. The additional production capacity will reduce lead times by the end of the second quarter,” he says.

More than 50,000 Bandit machines have been sold globally and are used daily in virtually every type of climate, on any terrain. Specialists in Remus, Mich., build all Bandit machines. The equipment serves professionals in the logging, tree care, biomass, land clearing, stump grinding, mulch, recycling, government and renewable energy markets.

In the video, see a demonstration of the Bandit horizontal grinder Model 1680XP processing sawmill slabs in Florida. The grinder is producing cypress mulch from leftover cypress and pine slabs.