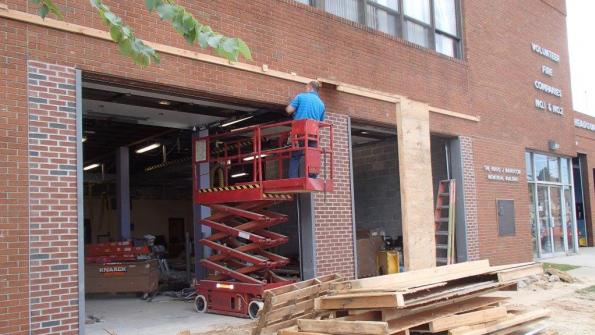 New Jersey firehouse gets an upgrade

The Carteret, N.J., main firehouse has been upgraded and expanded. According to officials, expanding the existing facility rather than building new saved tax dollars.

The Carteret, N.J., Fire Department main firehouse has been upgraded and expanded. A portion of the facility, largely underutilized for decades, has been converted into four additional bays to stage the department’s ambulances for quick response. Previously, the ambulances were kept outside, unprotected from weather and subsequent deterioration. Carteret is about 16 miles from New York City.

“These upgrades were a long time coming,” said Carteret Mayor Dan Reiman. “For years, this area of the firehouse sat underused; so, rather than spend millions of dollars constructing a new facility, we have pursued the most cost-effective and common-sense path forward.”

According to Fire Chief Mark Hruska, the expanded facility (construction photo below on left) includes a storage area for the department’s self-contained breathing apparatus (SCBA). The expansion, he says, will nearly double the usable capacity of the facility. Hruska, a 36-year veteran of the department, said having the rescue vehicles indoors will greatly reduce the amount of time that crews have to clear ice and snow off the vehicles in winter.

Hruska told GPN that the borough saved in excess of a million dollars by expanding the current facility rather than building new. “Even without property acquisition, if we had a piece of property and we were going to build a four-bay facility with what we’ve got in the current building, the cost would be greater than $1.3 or $1.4 million, and that’s without property acquisition, so we were able to come in here with a greatly reduced cost. It’s a win-win for both the taxpayers and the fire department.”