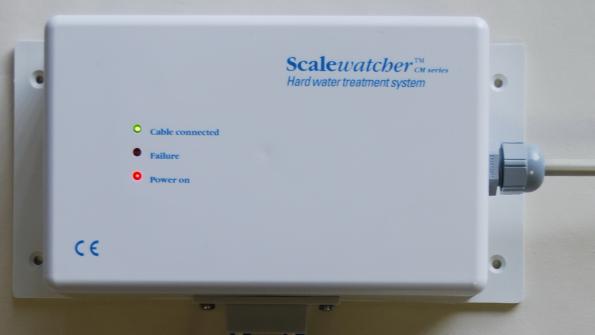 A computerized, electronic water-conditioner from Scalewatcher North America is providing cost savings and other benefits to the Orange County (Calif.) Fire Authority (OCFA).

A computerized, electronic water-conditioner from Scalewatcher North America is providing cost savings and other benefits to the Orange County (Calif.) Fire Authority (OCFA). The device is helping the agency save thousands of dollars a year on maintenance and early renewal of equipment. Following the first installation, 10 more devices have now been installed at other OCFA fire stations.

﻿The Orange County Fire Authority (OCFA) is a regional fire service agency that serves 22 cities. Most of Southern California has hard water, meaning it contains relatively high levels of calcium and magnesium. The hardness of the water in much of the county is about 300 parts per million or about 18 grains per gallon, which causes limescale to build up in pipelines and equipment.

OCFA initially arranged with a local dealer to install the company’s water conditioner on the main water inlet to its facility in Irvine. Previously, due to scale buildup, the fire authority endured high maintenance costs from keeping its tankless water heaters running correctly.

“The success of the first installation resulted in us purchasing four further units and then subsequently another six. I will be ordering more Scalewatcher units when my budget allows me to purchase them,” says Steve Klein, facilities manager at OCFA. “We have saved thousands of dollars on expensive maintenance.”

Other equipment at the firehouses has also benefited. “The dishwashers had been scaled up with white cloudy residue and now look like they just came off the showroom floor. We also had scale build-up in our showerheads and now they are all crystal clear with no issue with the holes being clogged up,” says Klein.

Following the water conditioner installation, service calls have been reduced by 40 percent and equipment is lasting longer. In addition, the showerheads and faucets no longer have to be cleaned or replaced.
Learn more about Scalewatcher North America here.