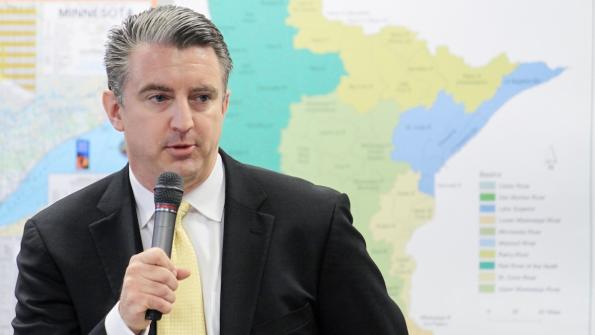 When last week’s nor’easter dumped about two feet of snow and brought hurricane-force winds to the island of Nantucket, the town’s modern day communication systems didn’t stand a chance.

There was only one functioning communications system.

“Some of our landlines are down, cell service is spotty, the Internet and TV are down, and the only thing we have is our public-safety radio,” Police Chief William Pittman told The New York Times in an interview done over that same radio system.

It’s the kind of crisis situation that a relatively young federal authority called the First Responder Network Authority, known as FirstNet, is mandated to address so public safety can respond more effectively in the future. Created by Congress in 2012 with $7 billion in federal funding, FirstNet is leading an effort to build a public-safety broadband network and give first responders access to 21st Century technologies in even some of the most remote, harsh environments and under chaotic circumstances.

Discussion about the network and the LTE-enabled capabilities it offers is picking up on the local level in some areas, as FirstNet officials make their way across the country as part of the initial state consultations.

“If you look at advanced LTE and how much data will likely be available even post-LTE, I think that increasing amount of capability to send more and more data and the richness will allow for applications that can do things that we can’t even think of right now,” Acting General Manager TJ Kennedy said in a recent interview with the Business of Government Radio Hour. (The entirety of that interview can be found here).

Kennedy said he expects to see an explosion of wearable technologies, such as gadgets that track a fire fighter’s health inside a burning building, and applications that allow police officers to do their job more efficiently. Some of that growth is already happening.

FirstNet, which started the state consultation meetings with Maryland last July, is now in the first of four phases in that consultation process. At the end, each state and territory will have a choice: Opt in – be part of the overall FirstNet plan – or opt out of the system, which would require the jurisdiction to build its own public-safety LTE network to FirstNet’s technical standards but assume greater financial risk?

The individual plan for each state and territory will no doubt be different and depend on factors like vulnerability to storms and geographic terrain. Already, the public-safety LTE networks that are already deployed or are in the deployment process – projects that were possible through federal grant programs, most notably Broadband Technology Opportunities Program (BTOP), that has been put on hold – offer a glimpse of how the architecture will vary.

In Adams County, Colo., a 16 LTE fixed-site communications system gives first responders the access voice, video, text and data in real time. Police officers used the network last fall to access databases for warrants or criminal records of those attending a Phish concert, even as concert-goers overwhelmed the commercial-carrier systems with social media traffic. This kind of priority access on a dedicated network is one of the key reasons FirstNet was created in the first place.

Meanwhile, a proof-of-concept network in New Jersey consists entirely of deployables, known as cells on wheels (COWs) and systems on wheels (SOWs), that give the system extra mobility.

Harris County, Texas—where Houston is located—has the oldest operating public-safety LTE system. Meanwhile, the Los Angeles Regional Interoperable Communications System Authority (LA-RICS) is building the largest and most expensive public-safety LTE system, which is scheduled to be completed during the third quarter of this year.

These systems will offer first responders modern technical capabilities and, just as important, access to a dedicated network that designed to provide public safety with access to broadband, even in the aftermath of storms and disasters.

FirstNet officials have indicated that many key decisions are expected to be made this year. After conducting a proceeding last year, the FirstNet board is expected to establish a policy that determines whether critical-infrastructure entities—for instance, utilities and transit entities—are eligible for priority access to the system. In addition, FirstNet officials agree that a self-sustaining business model must be developed, but no clear timeline has been established for doing so.

When the FirstNet system is deployed, first responders are expected to continue using their trusted land-mobile-radio (LMR) systems for voice communications, as they have for decades. Therefore, FirstNet initially is intended to be a supplement for public-safety communications, not a replacement.

However, 3GPP—the LTE standards body—is in the process of including mission-critical-voice capability in a future release of the mobile wireless technology. The first set of these standards is expected to be finalized early this year, while the remaining elements are scheduled to be approved next year. When the mission-critical-voice functionality would be deployed is one of the hottest debates in the public-safety communications sector.

State, city and county officials are expected to monitor the development of mission-critical voice over LTE very closely, because it could impact future decisions about making further investments into LMR systems.  FirstNet officials have said that they plan to design the FirstNet system to support mission-critical voice when it becomes available, but they have stressed that the decision to use this capability will be the choice of public-safety entities.