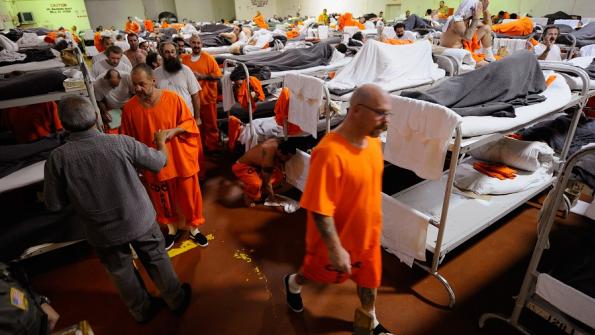 Jail overcrowding a perennial issue for many counties

New efforts are already underway this year to address what is a chronic problem in many areas: overcrowding in prisons and county jails.

New efforts are already underway this year to address what is a chronic problem in many areas: overcrowding in prisons and county jails.

Those proposals range from measures that would increase a jail’s capacity to ideas on how to shrink inmate populations.

In Yellowstone County, Mont., commissioners are eyeing a mill levy that would pay for the personnel needed to staff a building expansion. A group of sheriffs in Arkansas is pushing legislators to force the state department of corrections to take back hundreds of felons that are currently housed in county jails. A bill in Texas would allow counties to house some of the non-violent offenders in tents.

“These are not the folks where there is a big flight risk involved,” the tent bill’s sponsor, Rep. Lyle Larson, R-San Antonio, told the Odessa American. “The average cost (of housing inmates) is between $45 to $55. The cost of housing low-risk inmates should be a lot less than those in the hardened facility.”

Meanwhile, officials in Maine are discovering that a 2008 consolidation of jails has not resolved the chronic overcrowding at two county jails, one in Kennebec and the other in Penobscot. The state’s board of corrections is sitting on ice after Gov. Paul LePage refused to fill vacancies on the board. Maine faces a $2.5 million budget shortfall for county jails.

“I will not take good money, good taxpayer money and throw it after bad money. That system is made to fail. It cannot work,” LePage told the Portland Press Herald. “You get the operators of the jails to make all of the decisions and then you send the bill to the governor."

On the federal level, a bill is attempting to modernize the country’s approach to drug sentencing in hopes of reducing the federal inmate population and saving money. Called the Smarter Sentencing Act, the legislation would give federal judges more discretion in sentencing non-violent offenders.

The bill represents a shift away from the tough-on-crime laws that cropped up on the local, state and federal level in the late 1980s and early 1990s and contributed to much of the jail and prison overcrowding.

“The judicial system has been a critical element in keeping violent criminals off the street,” the federal bill’s sponsor, Sen. Richard J. Durbin, D-Illinois, told The New York Times.

“But now we’re stepping back, and I think it’s about time, to ask whether the dramatic increase in incarceration was warranted.”

Between the early 1970s and 2009, the number of Americans in state or federal prison quadrupled, according to The New York Times. The incarceration rate has slowed and even declined over the last five years, but prison and jail overcrowding remains a major, and costly, issue across the country, The Washington Post reported last fall. At least 17 states have maxed out the capacity of their prisons.