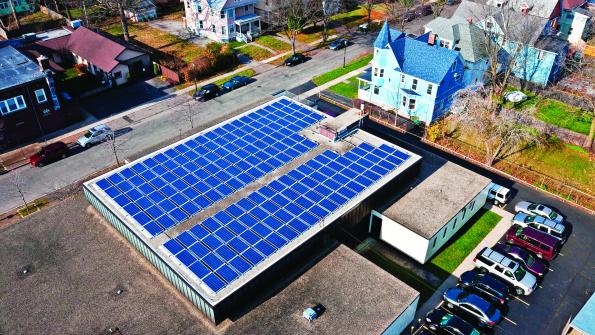 From brown to green

Rochester, N.Y., sheds its industrial past

Rochester, N.Y., built itself on industry – from the flour mills along the Genesee River to the birth of Kodak, Xerox and Bausch & Lomb. But as new technologies emerged and old industries faded, Rochester was left with empty factories, offices, and other remnants of a once-booming industrial economy.

That industrial reputation hung over the city for decades, but in the last 15 years, it’s taken a big shift – to sustainability. In fact, Rochester is increasingly popping up on America’s “greenest city” lists, thanks to a thoughtful, practical approach to incorporating sustainable practices and technologies into municipal infrastructure.

That shift began in the mid-2000s as city leadership became interested in greenhouse gas reduction as part of environmental compliance work. According to Anne Spaulding, energy and sustainability manager for Rochester, leadership first began a greenhouse gas inventory and then moved into “some work to incorporate more efficient lighting, HVAC systems and those kinds of things as we upgraded facilities. But it was kind of piecemeal.”

The American Recovery and Reinvestment Act, passed in 2009, however, changed everything. “As stimulus funds became available, we could really get into climate action planning and more,” Spaulding says. She continued to find more funding opportunities to support green infrastructure upgrades, and, in 2011, the city formalized those initiatives into its Office of Energy & Sustainability. The office focuses on reducing Rochester’s carbon footprint and energy use while saving money.

With the help of resources from organizations including the ICLEI USA, the U.S. Department of Energy, the New York State Department of Environmental Conservation, and the New York State Energy Research and Development Authority, as well as fellow cities whose mayors signed the U.S. Conference of Mayors’ Climate Protection Agreement, the city began chipping away at reducing its impact. Leadership began with the municipal buildings that were already targeted for upgrades and moving into alternative energy, such as solar power. Early on, Rochester-based engineering firm Stantec helped conduct feasibility studies of solar power for over 30 city buildings, prioritizing funding for those that were most suitable, starting with the Arnett Library and Rochester Public Market.

As funding became available, Rochester moved on to other types of infrastructure, constructing Sawdey Way, its first green street, complete with porous pavement and rain gardens for stormwater management. A green roof, porous pavement parking lot and LED lighting were added to Rochester City Hall. The well-used Genesee Riverway Trail continues to be expanded, connecting cyclists from downtown Rochester to the shores of Lake Ontario. The parking lot at Turning Point Park along the trail was recently repaved with porous pavement as well, and numerous brownfields along the way have been infilled and redeveloped into housing complexes and retail outlets.

Most recently, the city embarked on a project to install 24 electric vehicle charging stations in city parking garages and other spaces. The effort is so popular with drivers that one of the Rochester locations is in the top 5 percent of those most used in the country.

Getting these projects off the ground was not without its challenges, of course. “We have some capital funding for upgrades, but much has come through state and federal grants and utility rebate programs,” Spaulding says. “Solar panels, for instance, have a lot of upfront costs so those grants were critical in moving those forward.”

Because many of the city’s facilities were built decades ago, unexpected issues in integrating new technologies and practices could (and did) arise, from environmentally contaminated soils to syncing solar power with a building’s electricity meters.

“There was a bit of a learning curve for everyone, but we’ve worked with our partners to adjust to it,” Spaulding says.

Figuring out where Rochester stood in terms of energy use, carbon emissions, and the like was a major effort – one that took nearly three years to complete. But now that the city has this baseline data, it will be easier to see measureable results and expand focus beyond municipal infrastructure to community-wide initiatives that help the whole city reduce its impact.

“We’re proud of all the green infrastructure we’ve installed throughout the city,” Spaulding says. “Now that we’ve joined the U.S. Department of Energy’s Better Building Challenge, we’ve also pledged to reduce our energy use and carbon emissions by another 20 percent by 2020. So more is yet to come.”