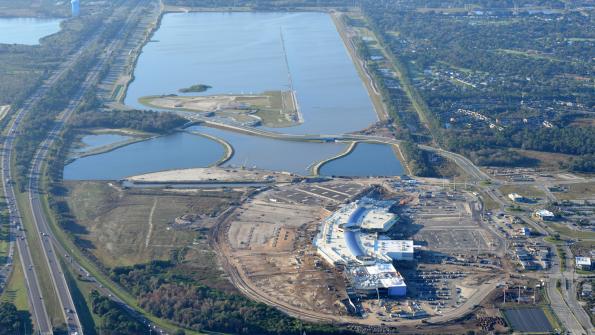 The 2.75-mile, four-lane extension of North Cattlemen Road in Sarasota County, Fla., seemed standard when the project team gathered at the starting line. It transformed into a challenging race to the finish when the county added an additional $6 million of improvements to the adjacent Nathan Benderson Park, its 500-acre lake and rowing facilities. The combined $22 million task became a design-build effort requiring coordination between the county, construction engineering consultant CDM Smith, the contractor and the park’s private developer to ensure the construction timeline of the park project caught up to the roadway expansion project.

Planning and communication during both team’s weekly progress meetings was instrumental in implementing the enhancements on schedule. “We invited the park team to our roadway meetings, and we attended the park team’s weekly meetings with multiple contractors, county staff, park event planners and designers,” says Chris Pecor, CDM Smith principal and project manager. Partnering with the county, CDM Smith led the effort to define the changes in project scope and funding and then negotiated approval between all stakeholders.

Construction, engineering and inspection services covered a 96-foot single span bridge over a new canal connecting the northern and southern sections of the lake, retaining walls and the base of the park’s 30-acre Olympic Village-style regatta island. The multiple design revisions combined with federal, local and private funding made the accounting for these change orders a challenging ordeal. “We had to keep track of the five buckets of money,” Pecor says.

The island, which features world-class boathouse facilities and finish-line grandstands for the 2,000-meter sprint course, is an example of sustainable design and construction. Pecor says, “Using onsite over-excavation of the existing ponds, the team obtained an additional 500,000 cubic yards of dirt from within the project limits to construct the island footprint. While saving money for the project, this option also reduced hauling fuel costs, damage to the local roadway network and environmental emissions.” Park upgrades also included bike and walking paths, which promote public health and alternative transportation choices.

As a direct result of the project’s significant teamwork and coordination, Sarasota County and the park were selected to host the 2017 World Rowing Championships (worldclassrowing.com). The project was named the American Public Works Association Florida Chapter’s 2014 Project of the Year and won the Florida Transportation Builders Association’s 2013 Best in Construction award.