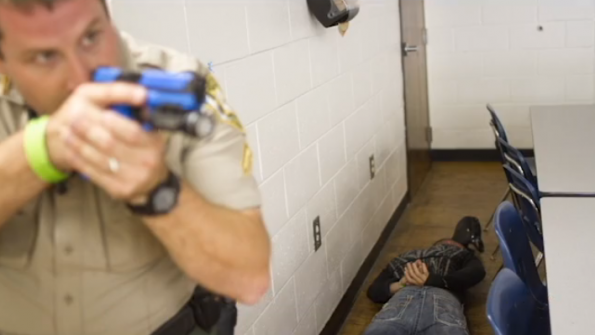 To prepare for the worst, Forsyth, Ga., emergency response personnel participated in an active shooter drill at the local high school last week; however some legal experts are criticizing such drills for being too realistic.

The Forsyth exercise took place with cooperation between the Forsyth County Sheriff’s Office, the Forsyth Fire Department, county EMS personnel and South Forsyth High School administration, according to Sheriff’s Office materials. Several hundred individuals took part in the training exercise to test their skills and to better understand how to react during such an emergency.

To simulate an active shooter, an actor wearing a black shirt and mask opened fire with a training gun and ran for cover in the west hall of the school, the Forsyth News reports. Parents, administrators and students from the school’s drama department responded realistically to the situation.

Emergency responders and law enforcement set up a triage and cared for student actors who were “wounded” or “killed” the Forsyth News reports. The simulation ended with officers neutralizing the shooter.

“I was in the cafeteria where the whole big ending shootout happened,” Barrett Crowder, a senior at the high school, told the paper. “The shooter came in, fired some rounds, ‘killed’ some people and I ‘broke’ my arm. Then he went up on the stage and like three deputies came in and shot him with the simulation [non-lethal training ammunition] rounds.”

To make the training more realistic, participants were instructed to react as if it were a real event. Cheney, who said he was originally approached in January about his interest in the training, had to behave as though it were a live situation.

“I was actually acting as I would as the principal of the building,” he told the paper. “I was in what was considered to be our designated command center trying to obviously move students to safety in my immediate area along with our administrators.”

But the realism of these exercises has elicited criticism. The Wall Street Journal reports several lawsuits are being filed by individuals who were never notified of the drills, and who become traumatized as a result of their unwilling participation.

In one such case, Michelle Meeker, an employee at a Denver nursing home, was forced into a storage room by an armed gunman last year. Horrified and crying, she begged for her life. Unbeknownst to Meeker, the gunman was actually a local police officer engaged in an armed intruder scenario.

The Wall Street Journal reports Meeker was so shaken by the incident she had to quit her job. She has filed a federal lawsuit against the officer and her former employer.

Since the mass shooting at Newtown, Conn., five states have passed or amended laws to mandate schools conduct active shooter drills, according to the National Conference of State Legislatures.