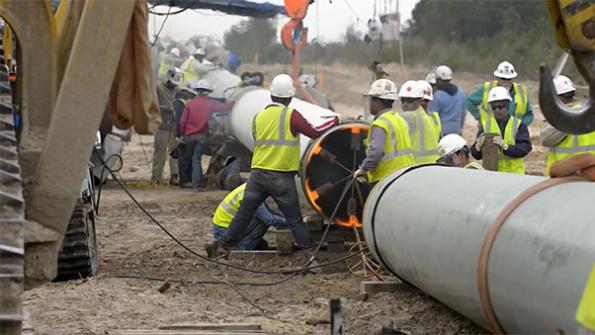 The proposed Keystone XL Pipeline project, which if approved would carry crude oil from Canada to Texas, is creating bitter divisions in communities throughout the Midwest.

Last weekend a rally was held in Neligh, Neb., to oppose the Keystone XL Pipeline, which would run crude oil from Canada to Texas refineries. Opponents say the pipeline poses an environmental threat, while supports argue the pipeline would decrease dependency on foreign oil and create jobs.

The rally was held on land owned by Art Tanderup, a Nebraska farmer whose property would be directly along the pipeline’s proposed route. “I’ve told them, ‘You’ll have to haul me out from in front of that bulldozer, because I’m going to protect this farm’,” Tanderup told The New York Times.

The rally attracted a crowd of about 8,000, The New York Times reports. Attendees included farmers and ranchers, city-dwelling environmentalists and Native American groups, among others.

One of the biggest concerns with the Nebraska portion of the pipeline is that a spill would irreversibly damage the Ogallala Aquifer, which houses water used to irrigate crops and provide drinking water to many Nebraskans, according to The New York Times. Others, like Tanderup, worry they will lose their land.

TransCanada spokesperson Mark Cooper told the AP further setbacks would hurt local economies. “Delaying the Keystone XL means encouraging the loss of good jobs for Nebraskans and more than $20 million a year in annual property taxes to counties for schools, roads and other infrastructure once the Keystone XL is at full capacity.”

But resistance isn’t limited to the state level. Federal approval for the pipeline project has been delayed six years, according to materials released by the American Petroleum Institute. Since the pipeline would cross an international border, President Obama must approve the final plan.

“President Obama continues to stand in the way of the tens of thousands of jobs this pipeline would create. Refining more Canadian oil at American refineries is a no brainer. Or it certainly should be, whether you look at the project’s benefits or the administration’s own studies. It will help displace oil from unstable parts of the world while enhancing our national and economic security.”

For more information on how the petroleum industry is shaping the Midwest, read American City & County’s coverage of the issue here.