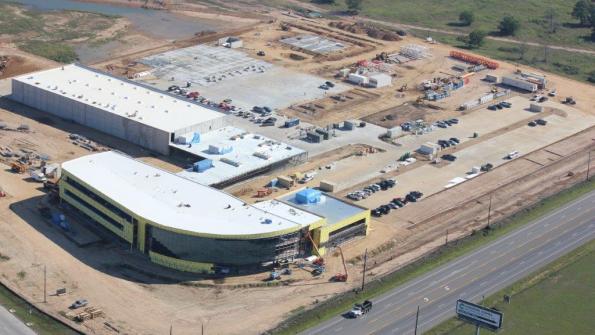 Because of “fracking,” many cities, especially those situated on shale plays, have seen tremendous population increases as well as economic revitalizations.

This past October, the U.S. produced more oil than it imported for the first time in over two decades, and by 2015, America could be the number one supplier of petroleum in the world. This has lead to economic booms in oil producing communities across the country.

Rayola Dougher, senior economic advisor for the American Petroleum Institute, put the boom into context: in 2007, 60 percent of American petroleum was imported; today the number is down down to 33 percent. America is producing a lot of petroleum.

What Dougher calls a “stunning reversal of fortune,” actually has everything to do with advancements in petroleum extraction technology – particularly with hydraulic fracturing, or “fracking,” as it is commonly called. “It’s really changed everything,” says Dougher.

One particular city seeing the benefits of this boom is Williston, N.D. Located on the Bakken Shale Play, the town has exploded both in population and economic activity over the past few years.

Katie Long, director of communications for Williston’s Department of Economic Development, says that in 2008, the city had a population of about 10,000 permanent residents. The most recent census count placed them at 25,000, but recent estimates figure the number could be closer to 50,000. “The census can’t keep up with us,” Long laughs.

And this is a good problem to have, Long says. Williston’s economy is growing at an exponential rate – so much so that “roads are crowded, parking lots are full – we’re constantly building, with more and more coming every day.” In fact, Long says, “We process more building permits than anyone else in the state.”

This boom, she says, is directly tied to the petroleum industry, and the recent technological advancements have allowed Williston to thrive. The city plans to build a $70 million recreational facility with funding from a 1 percent sales tax on petroleum products. Also in the works are multi-million dollar additions to the area hospital and a state-of-the-art computer and field training facility for new workers.

“Nearly all the funds for these projects can be traced back to oil and gas,” Long says.

Tomball, Texas, as well, is experiencing a boom. Baker Hughes, a leader in the petroleum industry, is building a new multi-million dollar, 50-acre training campus in town, and ExxonMobil will be moving its headquarters nearby next spring. The town is expected to grow from around 10,000 residents to more than 66,000 when the training facility is full.

Craig Meyers, Tomball’s community development director, says the city is already preparing for the huge influx. Funded by Harris County, Tomball is participating in two major roadway expansions, the 249 Tollway and the Grand Parkway, which will help better connect the city to the Houston Metro Area, as well as a slew of new housing developments and businesses.

“The growth in this area over the past 20 years, you wouldn’t believe it,” Meyers says, crediting Tomball’s success with advancements in the petroleum industry.

The petroleum industry has been a topic of scrutiny in recent years, but opponents face a hard fight, as 60 percent of the nation’s energy comes from oil. It provides 10 million jobs, and 8 percent of America’s GDP is directly tied to petroleum production. Dougher says that due to new advancements (ie. fracking) the industry is one of the leading drivers of job growth in the country. But is this a good thing?

Fracking is a four-letter word in some circles. A few years ago, there was major upset when Pennsylvanians discovered they were able to light their tap water on fire – a development, they said, that was a direct result of fracking in the Marcellus Shale Play, where local wells recorded levels of methane gas six times higher than local wells in areas without fracking. In Europe, countries including France and Bulgaria (which house the largest shale reserves on the continent) have banned the practice, citing environmental harm and the accelerated release of greenhouse gasses.

“There is so much misinformation out there over fracking,” she says, adding the flammable tap water has been an issue in Pennsylvania for nearly 80 years. She says that fracking below the water table, coupled with directional drilling methods, make the practice a viable tactic, and argues that if energy independence is really a goal in America, we have to utilize our all of our resources.

Dougher explains that 87 percent of offshore sites are federally protected and off limits for drilling. Additionally, the Keystone XL Pipeline, which would transport oil from Canada to Texas, is simply waiting on approval.

“Studies have shown [the pipeline] would have a negligible environmental impact,” Dougher says. It would also add around 42,000 jobs to the workforce, she says. “It’s the biggest shovel-ready project in America.”

Moving forward, Dougher says these issues can be solved with cooperation. “The challenge now is for our elected officials to understand this opportunity,” she says. “We’re at a good point, but it will require communities working together to take advantage of this."