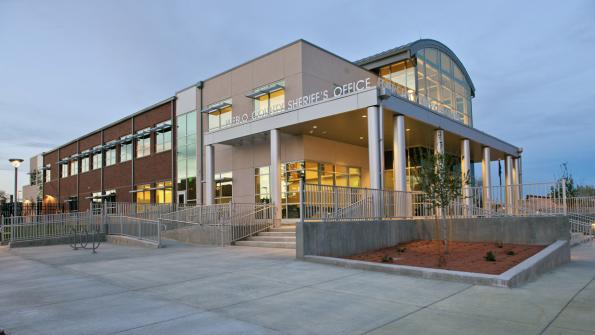 Preparing for the worst

The ESC was designed and built as two separate constructs. One houses the sheriff’s office, CSEPP staff, JIC and a media center. The other houses the EOC and the 9-1-1 center, and has been hardened to withstand 200 mph winds, bomb blasts and more. All building systems are redundant, including HVAC and power.

Prior to opening the new facility, the EOC and JIC were housed in separate facilities. “That made logistics much more challenging,” says Mark Mears, chief of the emergency service bureau within the sheriff’s office. “Having everything in one facility is great for everyday operations, but especially so for long-term events.”

Operations are enhanced by several technology upgrades. The EOC now offers an integrated multimedia capability, including a video wall that can portray from one to eight different images in multiple configurations to enhance situational awareness during incidents. In addition, CSEPP provided $6 million in funding for an 800-MHz trunked radio system master switch. According to Mears, the switch enables the county to join the statewide digital trunked radio system when circumstances warrant, while avoiding some of the signal transmission issues that previously had disrupted communications. Meanwhile, the 9-1-1 center received new 9-1-1 and radio dispatch consoles, as well as an Enhanced 9-1-1 system that is Next Generation 9-1-1-ready.

In May, the ESC’s capabilities were demonstrated during two simultaneous field exercises. One simulated a chlorine spill that exposed 45 people to a toxin. The other exercise simulated a spill of a mustard agent as the result of a forklift accident inside the PCD.

“We wanted to prove our model,” Mears says. “We thought that this was the way we wanted to utilize the facility, so we operated it according to our plans. It was very effective.”