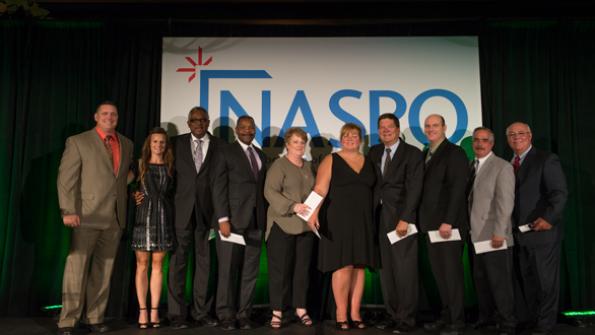 The National Association of State Procurement Officials (NASPO) met in Burlington, Vt., last week for their 67th Annual Conference. Attendees gathered from 47 states plus the District of Columbia for networking and educational opportunities.

The National Association of State Procurement Officials (NASPO) met in Burlington, Vt., last week for their 67th Annual Conference. Attendees gathered from 47 states plus the District of Columbia for networking and educational opportunities.

Each year, NASPO honors a Chief Procurement Officer who has gone above and beyond in leadership, service, and dedication to the association and the public procurement profession with the Giulio Mazzone Distinguished Service Award. Mazzone was a NASPO member and leader of the association and became the namesake of this award. He passed away 20 years ago.

This year’s Mazzone Distinguished Service Award recipient is Jeff Holden, Deputy Commissioner for the state of South Dakota. Holden is a former NASPO president and board member.In addition, a special 20th anniversary Mazzone Award was presented to NASPO Life Member Jack Pitzer, who served in Iowa state procurement 40 years ago and remained a leader in the procurement profession until his retirement in 2006.

NASPO also honored the top three submissions to the George Cronin Awards for Procurement Excellence which recognize achievements and savings in state procurement programs. Receiving the Gold award was Virginia for their submission eVA Mobile Apps. California took home the Silver award. Its nomination was titled “Modeling the Path.” The Bronze award went to Tennessee for its nomination: “Innovation in Facilities Management.” Information on the NASPO Mazzone and Cronin Awards may be found here on the association’s website.

At this conference, NASPO once again offered an optional half-day professional development training opportunity. This year’s session was titled “Navigating Through Negotiation Styles and the Ethical and Legal Aspects of Negotiations.”Omid Ghamami of Purchasing Advantage led the session. In the photo at left, NASPO Past President Dean Stotler (Del.) addresses attendees at the conference State Dinner. Photo credit: Barrie Fisher.

At the annual business meeting, elections took place for 2014-2015 NASPO Board of Directors posts. Deborah Damore (Vt.) was sworn in as President and Paul Mash (Utah) was elected President-Elect. Newly elected members of the board are: Lance Fulcher (Miss.) and Dianne Lancaster (Ore.). Jim Butler (Calif.), Larry Maxwell (N.M.), and James Staton (D.C.) were re-elected for another term.

Representatives of the groups presented on a panel along with NASPO President Dean Stotler.