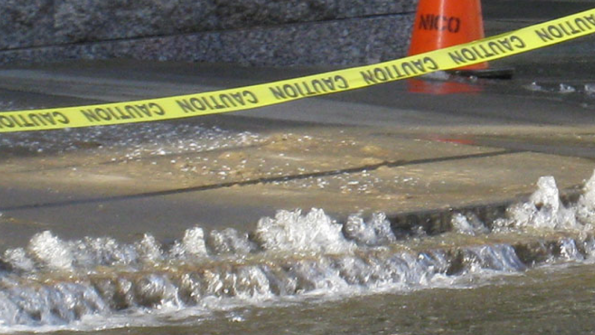 Aging water infrastructure is causing problems across the country

A main break in San Diego left thousands of residents without water and the city scrambling to restore service last week, and San Diego’s emergency is indicative of a growing problem facing municipalities across the country.

The break in a nearly 70-year-old, 18-inch cast-iron main located in the Kearny Mesa community disrupted service Wednesday evening. The city shut off water through the main overnight, according to UT San Diego.

Repairs were made and service was restored by 7 a.m. Thursday, but heavy damage was done to the neighborhood. Local TV station CBS 8 reports water flooded streets, garages and homes. Many residents lost important possessions and family heirlooms.

The city had to bring in a hydraulics crew due to the main’s size and depth, UT San Diego reports. To reduce further problems, there are plans to replace all cast-iron water mains in the city by 2017.

This break comes weeks after a similar problem in Los Angeles, which spewed 20 million gallons of drinking water across the University of California campus. The New York Times reports the main that failed was nearly 90 years old.

Doreen Hoffman, of Stamford Scientific International, says these problems will continue if cities do not make water infrastructure spending a priority.

“Cities are fighting for dwindling funds from state and federal sources,” Hoffman said in a statement.  “The process is lengthy and there’s no guarantee they will get the funding, so many are turning to secondary market financing in the form of direct loans from public and private banking.”

The Fort Worth, Texas Water Department is a prime example of how employing upgrades improves public services, says Hoffman. The agency recently completed a major overhaul of its entire system, which has resulted in increased efficiency and long-term savings.

“Replacing the existing equipment with high-efficiency alternatives was so effective that they did not have to implement a projected, very expensive plant addition,” Hoffman said in a statement. “Instead of replacing the old equipment piece by piece, they were able to raise the funds to do a major renovation.  As a result, they’re processing more water than ever before, while experiencing huge savings in water and energy.”

Read more about water security and the issues surrounding it here.