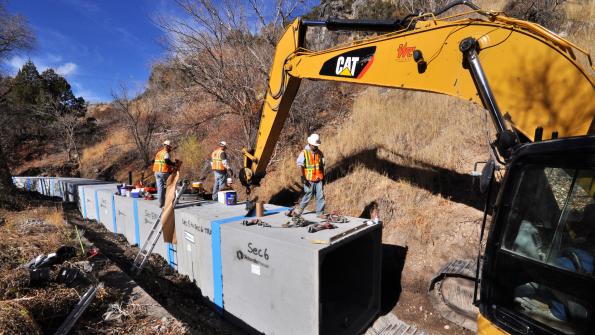 Government projects make up a big part of the total construction market. “In 2013, public construction reached 30 percent of total U.S. construction put in place,” says Philip Warner, who is a research consultant at Raleigh, N.C.-based FMI Corp. His firm provides management consulting and investment banking to the engineering and construction industry.

Warner, however, expects government’s share of the total construction market to drop at least 3 percent in 2014. He says state budgets remain a problem for funding major public works projects. He notes that state budgets are on the mend after five years of austerity budgets. “However, it is still a question as to whether state governments are now ready to spend, or have learned a lesson that it would be better to rebuild tax reserves for the next recession.”

Emery still remains cautious. “Year after year, the costs of maintaining infrastructure and providing necessary services go up, but our revenue streams force us to attempt to do more with less. For several years, we had to reduce our budgets. The last couple of years have been a bit more flat.”

Infrastructure construction has taken center stage in Troup County. “Besides the Salem Road steel truss bridge replacement project, I have three other bridges that I’m replacing in 2014, and possibly a fifth bridge within the next year or so,” Emery told GPN. The county’s special-purpose local option sales tax (SPLOST) is making the bridge replacements possible, says Emery. “The public works projects were identified prior to the referendum vote that our local population approved. This is the third such SPLOST approved in a row by voters in Troup County. Each of the SPLOSTs runs 5 or 6 years.”

About 92 percent of respondents to Penton’s mid-year 2014 survey of government officials say their communities’ 2014 water budgets are about the same or more than 2013 budgets. Go to Part 1 of the mid-year 2014 Keating report for details on the survey. One recent water project that stands out is the $25.8 million emergency water restoration project in Cache County, Utah.

The Cache Water Restoration Project (CWRP) was under the auspices of the U.S. Department of Agriculture’s Natural Resources Conservation Service. The CWRP project (photo below, at left) involved the reconstruction and improvement of approximately six miles of mostly open, unlined channels that make up the Logan and Northern, as well as the Hyde Park and Smithfield canals.

The Cache Water Restoration Project is the result of a fatal landslide in 2009 that killed three people living in a home below an irrigation canal that hugged a steep hillside in Logan, Utah. The tragedy prompted a total reconfiguration of the canal systems. It has been a three-year process to reconfigure the canals, meaning some facilities and farmers along the waterways have gone without water since the breach. The improvements to the canals will deliver water safely and efficiently to numerous individual, agricultural and institutional users.

With the third quarter of 2014 underway, GPN believes that government budgets are gaining strength, but that public sector construction activity is mixed. One bright spot: on Aug. 8, President Obama signed legislation that keeps the Highway Trust Fund solvent until June 2015.