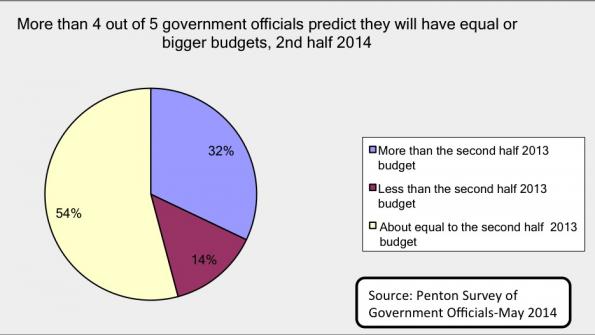 Government officials are fiscally optimistic. We base this conclusion on an exclusive E-survey of readers of Penton magazines Government Product News, American City & County and Government Procurement.

Government officials are fiscally optimistic. They see improving budgets and increased spending. More than four out of five administrators (86 percent) see their government’s budgets in the second half of 2014 equal to or greater than second half 2013 budgets, according to an exclusive E-survey of readers of Penton magazines Government Product News, American City & County and Government Procurement.

Yes, government officials may be more upbeat than they have been in the past, based on the survey results: Almost six out of 10 respondents say they expect to receive the same level or more federal and state funding to their local government in 2015 compared to 2014.

One area of concern: health care. About half of the 240 respondents report their jurisdiction will be budgeting more on health coverage for employees in 2014 compared to 2013.

Challenges remain for federal budget planners through the rest of this decade. One example: the Social Security Administration’s Social Security Disability Insurance (SSDI) entitlement program will run out of cash by 2016 unless Congress takes action. More than 11 million Americans currently rely on the program.

Michael Keating (photo at right) is senior editor for Government Product News and the GPN web site. He can be reached via e-mail at [email protected]