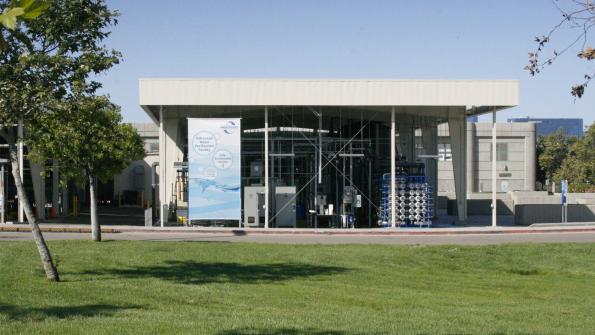 The Water Purification Demonstration Project explored the feasibility of using water purification technology to purify recycled water and provide a sustainable source of drinking water. The project proposed that purified water become part of the local water supply through indirect potable reuse (IPR). In IPR, purified water is added to an environmental buffer to combine with imported water sources before going through traditional drinking water treatment. In San Diego’s case, the environmental buffer would be the San Vicente Reservoir.

As part of the $11.8 million project, the city operated an Advanced Water Purification (AWP) Facility that purified 1 million gallons of recycled water per day for one year using membrane filtration, reverse osmosis and advanced oxidation with ultraviolet light and hydrogen peroxide. After more than 9,000 water quality tests, the city confirmed that recycled water can be purified and safely added to the San Vicente Reservoir.

Multiple reservoir studies, regulatory coordination, an energy and cost analysis, and an education and outreach program were conducted. The California Department of Public Health and the San Diego Water Quality Control Board approved the reservoir augmentation concept and concurred that the purified water meets all federal and state drinking water standards.

In 2013, the San Diego City Council unanimously adopted the project report. Since then, the city has been working to further define San Diego’s water reuse strategy, which includes determining how to divert more wastewater for recycling and exploring direct potable reuse (DPR), where purified water is sent directly from the water purification facility to a drinking water treatment plant (thus bypassing the reservoir).

Through grant funding made available by voter-approved Propositions 50 and 84, the city has partnered with the WateReuse Research Foundation to monitor, evaluate and demonstrate a test plan for direct potable reuse. Since no regulations currently exist for DPR in California, the city will test ozonation and biological activated carbon filters as additional treatment barriers to possibly compensate for the absence of an environmental buffer and help define DPR regulations.

The city is developing an implementation plan for a full-scale, 16-million-gallon-per-day facility, and continues to operate the AWP Facility. In December 2013, San Diego received the Huell Howser Best in Blue Award from the Association of California Water Agencies for achieving communications excellence with its Demonstration Project’s public outreach program. The education and outreach program has increased understanding and approval of water purification, with public support rising from 26 percent in 2004 to 73 percent in 2012.