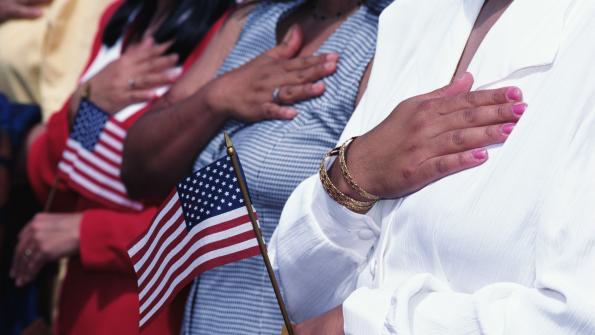 Speaking at the Urban Institute, Chicago Mayor Rahm Emanuel and Illinois Rep. Luis Gutierrez said they were confident that comprehensive immigration reform will be signed into law this year.

Chicago Mayor Rahm Emanuel and Rep. Luis Gutierrez (D-Ill) both expressed optimism that the nation will change its immigration policies this year. Speaking at the Urban Institute, a D.C. based think tank, the two leaders were confident that comprehensive immigration reform will be signed into law.

Emanuel said there is no fear that immigrants are somehow a drain on the local economy. “[Immigrants] are a net plus for Chicago,” he said. “They buy homes. They start businesses.” Approximately 40 percent of new small businesses created in Chicago are owned by immigrants, he added.

“We are an immigrant city,” said Emanuel. “That is our history, that is our future.”

Last summer, the Senate passed a politically contentious immigration reform bill that would give a path to citizenship to nearly 11 million undocumented immigrants, according to The New York Times, but the bill is currently languishing in the House, where Speaker John Boehner refuses bring it to a vote.

During the Urban Institute discussion, Emanuel, who was President Barack Obama’s first chief of staff, said that if House Republicans continue to sit on the bill, the president is likely to take executive action, circumventing the political back and forth currently stalling the bill.

Gutierrez expressed more faith in his Republican counterparts, citing what he sees to be a zeitgeist in the political right. Pointing to pro-immigration Republican Renee Ellmers’, (R-N.C.) recent primary victory and the 25 to 30 Republican partners Gutierrez has secured in the House, he says the right is understanding the future of their party is tied to immigration.

Both men agreed that either by House vote or executive order, immigration reform will happen by the end of the year.

Click here to read more about the impacts of immigrants in another major U.S. city – New York, or watch the Urban Institute discussion here.