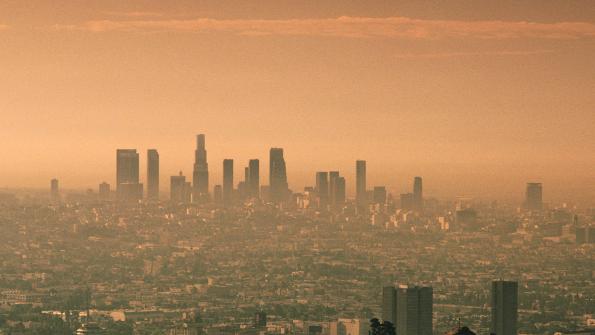 Salt Lake City has some of the worst air quality in the country, according to the Environmental Protection Agency (EPA), and the problem looms as one of the city's main hindrances to economic growth.

This past winter, Salt Lake City hit a low point, when the city’s air held 130 micrograms of pollution per cubic meter in January, according to CBS. The EPA’s cutoff for “clean” air is 35 micrograms.

So persistant is the air quality issue that it has become the area’s top political and economic concern according to The Atlantic. At the state level, lawmakers have worked on more than 25 air quality bills, and the city has done its best to foster a walkable, bikeable downtown.

Utah Governor Gary Herbert has spoken out on the importance of air quality and has outlined a plan to reduce pollutants from cars, buildings and homes over the next several years, The Atlantic reports.

As part of this plan, legislation to cut down on wood burning and hire more state air-quality regulators passed last month, according to the Associated Press. The wood-burning legislation will help about 200 homes reliant on wood stoves for heat to convert to cleaner systems. Also proposed in the plan are extending tax credits to encourage the use of plug-in hybrid vehicles.

"The last two years have been bad, and that's raised the concern among the public. I see that as a positive thing since it's mobilized the electorate," Alan Matheson, the governor's senior environmental adviser, told The Atlantic.

Also mobilized by the poor air quality was the Salt Lake Chamber of Commerce, which now lists air quality as one of its top policy priorities. The Atlantic reports the chamber is concerned the pollution will cut down on tourism and degrade the city’s reputation as one of the best places in the country to live, two of the city’s major economic drivers.

Now the question is, ‘will these efforts be enough?’ The Bureau of Economic and Business Research, a research center located at the University of Utah, says that by 2040, Salt Lake City’s population will double, drastically increasing the amount of traffic in and around the city.

Another issue is due in part to Salt Lake City’s geography, CBS reports. In a process known as temperature inversion, the cold air in the valley surrounding the city falls, and the warmer air from the mountains above the city remains aloft, acting like a lid, trapping pollution over the city.

Salt Lake City’s Mayor, Ralph Becker, says efforts in the short term are promising, but drastic action must be taken to ensure the viability and health of the city. He told The Atlantic, “We have done and will continue to do a lot to diminish our contributions to the air pollution and the valley, but the only way we'll be able to make significant changes to the air quality is to take it on a regional scale.”