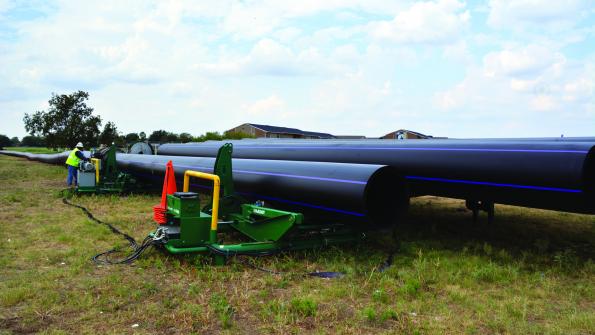 Access to water in the United States is often seen not as a privilege, but as a right.

But water is increasingly hard to come by, especially in Texas. More than 83 percent of the state was in severe (D-3) to exceptional (D-5) drought conditions last year, and Wichita Falls in particular lost 70 percent of its water supply in 2012 and 2013.

The combined capacity of the city’s water supply, Lakes Arrowhead and Kickapoo, dropped 30 percent in 2013. The city not only rapidly lost its ability to provide water to its citizens and industries, but it lost its ability to supply wholesale water to surrounding municipalities that experienced similar drought conditions.
More than 140,000 people were affected by these extreme drought conditions.

“We got to a point where we needed to take immediate action,” Shawn Garcia, an engineer with Wichita Falls’ Public Works Department, says.

The water reuse project takes purified water, created from the 7 to 10 million gallons of treated wastewater that is normally released into the Wichita River every day, and sends it through a 12-mile HDPE pipeline constructed by ISCO Industries to the Cypress Water Treatment Plant. It then goes through extensive filtration, reverse osmosis and clarification, and is mixed with raw surface water.

That 50/50 mixture goes through another treatment process and is finally supplied to the public.

“We have no groundwater source, and we can’t jump out there and build a lake,” Kerry Maroney, a consulting engineer for the city, says. “This project is the quickest way to pick up another seven to eight million gallons a day.”

About 80 percent of the total withdrawals in the United States are from surface water resources, and the U.S. population generates an estimated 32 billion gallons per day of municipal wastewater. According the 2012 EPA Guidelines for Water Reuse, arid regions like Texas are natural candidates for water reclamation and significant projects.

The reuse project will supply about half the city’s water supply. In less than four months, ISCO supplied 65,000 feet of 32-inch HDPE pipe. The city will reuse the pipe for a permanent water reuse project to be completed within the next four to five years.