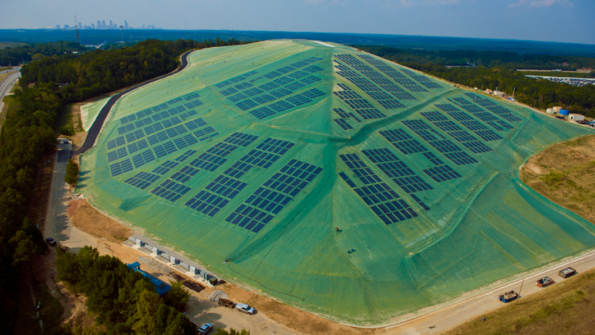 By converting unused landfills and other underutilized public property to solar farms, Atlanta will profit while lowering its greenhouse emissions.

The city council is considering a proposal to lease 32.9 acres of closed landfills and underused public land across the city to New Generation Power, a Chicago-based energy company, to install, maintain and operate an array of solar panels. Local news source Creative Loafing reports the power generated at the sites would be sold to the state electric utility, Georgia Power.

If the council approves the deal, New Generation Power would be responsible for applying to a lottery held by Georgia Power, which gives organizations the opportunity to sell solar energy to the company. Creative Loafing reports the outcome of the lottery will determine how many acres can be converted into solar farms, but the result could be Atlanta’s largest green-energy project to date.

If approved, the first arrays will be going online by the end of the year.

According to Georgia Power Materials, the lottery is part of the company’s Advance Solar Initiative, with the goal of contracting out 210 megawatts of solar capacity by the end of 2014. One way the utility will accomplish this is by selecting small- and medium-scale solar providers to sell their power to the utility.

Denise Quarles, Atlanta’s sustainability director, told Creative Loafing the move will cut down on the city’s greenhouse gas emissions and has the potential to see profit from the unused land. While exact figures are pending, Quarles says the solar initiative would generate “some form of revenue.”

The effort mirrors a smaller-scale project in which the at-capacity Hickory Ridge Landfill, located on the outskirts of the city, was converted into a solar farm in 2011. At the time, CNN reported the landfill was covered with a polyurethane liner, and outfitted with 7,000 flexible solar strips capable of producing one megawatt of energy.

"When a landfill is [finished with] taking waste, it basically is dormant and there's not a lot of uses for the property," David Stuart, area environmental manager of landfill owners for Republic Services told CNN. "But its natural attributes – being a tall structure, out of the shadows of the tree line – gives it a unique advantage as a solar project.”

The new effort could produce upwards of five megawatts, or enough to power 525 homes a year, for the city’s energy portfolio, according to Creative Loafing. Colleen Kiernan, director of the Sierra Club’s Georgia Chapter, told the paper the solar farming plan is “probably the best thing” the city could do with former landfill sites.

Citing US Environmental Protection Agency numbers, CNN reports there are around 100,000 closed landfills in the country, representing tens of thousands of acres of property that could be used for similar renewable energy projects.