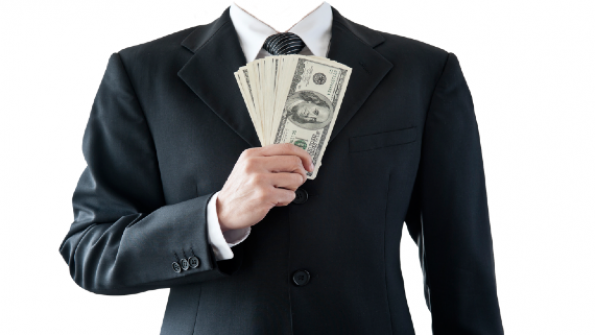 A new report from the Center for Media and Democracy highlights the need for local governments to ensure public funding going to partnerships with private entities is best serving the taxpayer’s needs.

America’s six highest paid “government workers” are not government workers at all, but executives who privatize public services, according to the Center for Media and Democracy (CMD), a non-partisan progressive watchdog group.

According to the report, these six high-paid workers (which include presidents, CEOs and directors) have privatized public services – and in the process signed contracts that contribute to huge salaries, a sizeable portion of which comes from government coffers.

The top six executives include:

George Zoley – The CEO of private prison giant GEO Group, Zoley made $22 million in compensation from 2008 to 20012. CMD estimates about 86 percent of GEO Group’s revenue comes from public funding.

David Steiner – President and CEO of Waste Management, the largest private sanitation company in America, Steiner made $45 million between 2006 and 2012. According to Goldman Sachs, Waste Management takes about 50 percent of its revenue from taxpayers.

Ron Packard – Founder and Chief Executive of K12, a for-profit education company selling online curriculum materials to state and local government, Packard made more than $19 million from 2009 to 2013. CMD reports K12 takes about 86 percent of its revenue from taxpayers, despite the fact only 28 percent of K12 cyber-schools met state standards from 2010 to 2011.

Richard Montoni – CEO of Maximus, a for-profit law firm handling government services for poor and vulnerable residents, Montoni made over $16 million from 2008 to 2012. CMD did not estimate what percentage of Maximus’ revenue comes from taxpayer dollars, but reports that the company has a history of improper billing.

Nicholas Moore – Managing Director and CEO of Australian infrastructure firm Macquarie, Moore made $8.8 million in FY2013. According to CMD, American tax and toll payers contribute to a significant percentage of the company’s revenue from infrastructure projects in Chicago, Indiana and Virginia.

While public private partnerships (P3s) can help cash-strapped governments provide public services, groups like the CMD see these executives’ large salaries as indication that P3s need solid systems of checks and balances to ensure taxpayers aren’t being taken for an expensive ride.

In the report, CMD argues that these large salaries highlight the need for accountability and transparency in P3s. “Given these astronomical salaries, and evidence of higher prices, poor service and at times outright malfeasance, taxpayers have every right to be concerned about how their outsourced dollars are spent,” Lisa Graves, Executive Director of CMD said in a statement.

However, this does not mean P3s can’t be beneficial for both public and private entities. In his OpEd for The Huffington Post, Donald Cohen, chair of In The Public Interest, a resource center on privatization and responsible contracting, says that public funding is still the least expensive way for local governments to finance major infrastructure projects, but that these investments are often seen as too costly or too politically difficult when they require new taxes or fees. This is where P3s come into play.

For a P3 to be successful, Cohen argues private entities must be held publically accountable. To help state and local officials ensure private investment in public infrastructure serves public need and remains solidly in public control, In the Public Interest has assembled a backgrounder. Read American City & County’s coverage of the backgrounder here, and be on the look out for Cohen’s exclusive commentary for AC&C in the coming weeks.