In a press release on the report, the NICB states: “When the number of metal theft claims per month and monthly average copper prices are compared, the number of claims filed is found to have a statistically significant correlation with the price of copper.”   The NICB says that in 2013, “There have been reports of copper thefts at numerous locations coast to coast including one from Seattle-Tacoma International Airport which disabled the approach lighting for one of the runways.” The NICB adds that across the U.S., “less brazen but equally damaging thefts have continued to darken streets and disable traffic controls.”

To find out about efforts to reduce copper theft in the U.S., GPN reached out to Frank G. Scafidi who is Director, Public Affairs at the NICB.

GPN: Is there anything public agencies can do to stop copper theft?

Frank Scafidi: The best thing that state and local governments can do to thwart this problem is to “box” it in. They need to build a box with these four sides: legislation, enforcement, prosecution and education.

The kinds of thefts most communities are experiencing requires a conversion point — a facility where copper can be turned into cash. Usually that is a metals recycling yard. By creating a simple process for identifying people who are showing up at scrap yards with pickup trucks loaded with scrap copper and catalytic converters, you can have an immediate and significant effect on this kind of crime.

If legislation is lacking, draft effective law that targets the problem but not at the expense of legitimate recyclers. But with legislation, you need enforcement and prosecution so that people understand that there are consequences for continuing illegal behavior. Finally, education is the cheapest form of prevention. Educating the public and the business community on metal theft and how to prevent it can pay huge dividends with minimal resource investment. 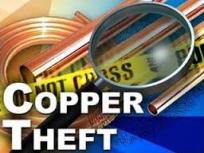 GPN: What metals are most susceptible to theft?

FS: Anything that has recycled value — copper, brass, aluminum, catalytic converters (they have minute amounts of precious metal in them). There have even been cases where brass grave markers have been stolen — that’s about as low as one can get, but shows the level of greed people are willing to adopt.

Scafidi knows from personal experience that valuable copper is all around us. “I had a bathroom in my 48-year-old house remodeled recently and this was in the wall — copper. Three-inch vent pipe runs throughout the house and all the water and waste piping is copper as well. It is worth more than the home.”

With a 100-year heritage, the NICB is a not-for-profit organization dedicated exclusively to fighting insurance fraud and crime. It brings together the collective resources needed to prevent, detect and deter these crimes.

This video from an insurance company shows how you can prevent copper theft.