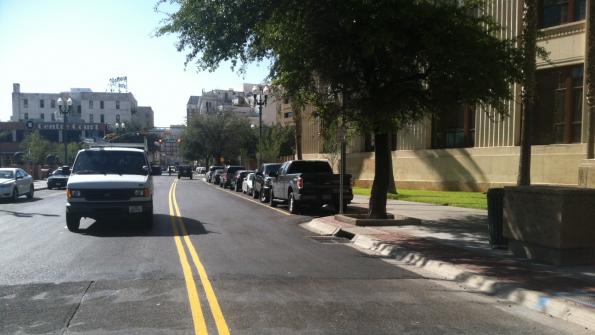 From the moment in 1859 when surveyor Anson Mills drew the first platted map of El Paso, Texas, San Antonio Avenue was destined to be a centerpiece of this southwestern city.

Mills’ map depicts a horse and buggy travelling east among perfectly squared-off lots, crossing the main acequia, a hand-dug canal which carried water from the Rio Grande into nearby agricultural fields. More than 154 years later, San Antonio Avenue is once again assuming its key role in El Paso’s fast-growing and ever-changing downtown.

El Paso just completed a $2.4 million set of streetscape improvements on the same stretch Mills once envisioned as a thoroughfare for horses and buggies. Improvements included mill and overlay of the asphalt pavement, complete reconstruction of the sidewalks and the completion of ramps that comply with the Americans with Disabilities Act.

“The city of El Paso’s comprehensive plan recognizes the importance of streets as public spaces, especially Downtown,” City Engineer Irene D. Ramirez says. “This project was designed to not just maintain a street, but to enhance the experience of being in the historic, urban core of the city.”

To that end, the project included the installation of street trees, distinctive street name signage and decorative hardscape elements including stamped concrete on sidewalks and in intersections.

One of the most noticeable changes is the conversion of San Antonio Avenue from a one-way street to a two-way street.

For the first-time in 60 years, traffic is once again flowing in both directions on San Antonio.

“Studies have shown that converting one-way streets to two-way streets
cuts down on speeders, creates more exposure for businesses along the street, and makes streets safer for pedestrians and bicyclists,” says Fred Lopez, city Transportation Planning Manager. “This project has the added benefit of giving motorists another option as they seek to navigate our increasingly vibrant downtown.”

Improved navigation won’t be restricted to motorists. In concert with the street reconstruction project, the city’s Downtown Management District will install the first elements of its comprehensive downtown wayfinding program in the newly-reconstructed portions of the street. Wayfinding kiosks and signage will direct pedestrians among the city’s growing list of downtown amenities including a new Triple-A ballpark, government offices and the newly-renovated San Jacinto Plaza, around which the historic downtown continues to grow.