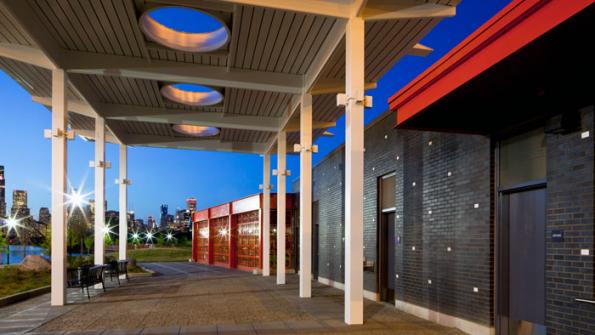 It was a top priority for Chicago Mayor Rahm Emanuel’s administration to restore parts of the downtown Chicago Riverbank to change the area’s image, boost the economy and provide more opportunities for recreational activity in the city. As a part of this effort, Emanuel announced the construction of four new boathouses along the Chicago River.

In 2011, the Environmental Protection Agency (EPA) ordered Illinois officials to adopt more stringent water-quality standards to make stretches of the Chicago River safer for recreation. Officials noted the channels increasingly are drawing kayakers, paddlers and boaters who can ingest significant amounts of water while plying the waterways. That same year, Emanuel and representatives from the EPA announced plans to make the Chicago River the city’s next recreational frontier.

As Chicago worked to transform the long-polluted and neglected Chicago River into something more attractive to its citizens, two boathouses on its north and south sides helped catalyze the movement — creating key public access points along the river’s edge and providing facilities where the city’s rowing teams could develop their skills. "Much like Lake Michigan is Chicago's front yard, the Chicago River is our backyard and should be an asset that people across the city enjoy, not avoid," Emanuel said at a news conference in Ping Tom Park.

The boathouses were designed by Chicago architect Chris Lee, of the Johnson and Lee architecture firm, as a departure from Chicago’s “cookie-cutter” public buildings. Tax Increment Financing (TIF) funds were used to build a wall and natural features around the Chicago riverbank in 2011. By the time the new boathouse was approved by the Park District, $2 million in funds was gathered from Western Avenue South TIF, along with a share of $2 million in unused funds for the cancelled 2012 NATO Summit, and a $1 million contribution from Brian Gamache, CEO of WMS Industries, whose headquarters overlooks the site from across the river.

The Ping Tom boathouse is the first of four boathouses to be constructed. The facility is a one-story, three-season building with approximately 2,400 square feet of kayak and canoe storage, restrooms, an office and janitor’s room. The exterior plaza space consists of a metal canopy and a walkway to a floating dock. The boathouse offers kayak rentals during the summer season and a public dock that is available for use by non-motorized boats during park hours.

It is hoped the project will continue to increase accessibility to the river as it continues to progress broader river restoration efforts.