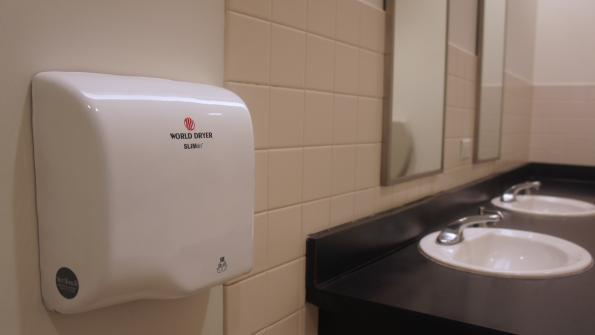 Using hand dryers instead of paper towels in restrooms is improving sanitation and cutting costs in the Community Counseling Center in Cape Girardeau, Mo.

Based in Cape Girardeau, Mo., Community Counseling Center has served the mental health needs of citizens in a five-county region of southeastern Missouri since 1974. The Center is an administrative agent for the Missouri Department of Mental Health. It offers crisis intervention, inpatient and outpatient psychiatric services, and social and rehabilitative programs. The center works out of 16 locations defined by their functions, such as administrative and medical offices, community event and recreational facilities, a group home and, most recently added, an apartment complex.

The agency employs 200 full- and part-time health care professionals, and last year provided 150,000 hours of treatment and intervention to 6,000 individuals. Many of the Center’s facilities are publicly accessible, and by law, must be ADA-compliant. Funds from the state, sliding-scale service fees, and private donations support the center.

Larry Ream joined the staff about 18 months ago to head up the center’s facilities management operations. One of his first tasks was to familiarize himself with the functions and costs of his department and to improve existing procedures. Community Counseling Center’s home office in Cape Girardeau had been using paper towels in its restroom facilities. Ream noted, “As one of my budget recommendations, I looked at cost per month and then cost per year. Then I looked at the cost of a hand dryer unit and installing it. When I found that the ROI on it was only 90 days, the decision to move to hand dryers instead of paper towels was easy. I didn’t even have to look at the labor cost associated with paper towels.  I went in to the executive director and showed him the return and he said, ‘You haven’t bought them yet?’”

Although Ream researched hand dryers online, he relied more heavily on personal experience in selecting a manufacturer of hand dryers to replace the paper towels.

“I looked around at every restroom in my travels,” he said. “I continued to see World Dryer products, so I took a closer look at the company’s products. It offered a larger selection than its competitors did. When I saw the SLIMdri and the fact it featured a compact structure of 11 inches high, 12 inches wide, and 4 inches deep which made it ADA-compliant, I was sold. What also sold me on the SLIMdri hand dryer is that it is almost 40 percent faster than other ADA surface-mounted hand dryers and is energy-efficient.”

SLIMdri hand dryers are up to 70 percent more energy-efficient than other hand dryers, according to the manufacturer. SLIMdri is GreenSpec-listed and offers LEED credits to facility managers. The hands-free automatic unit is easy to install and includes SteriTouch antimicrobial technology to shield against the buildup of bacteria.

Community Counseling Center first purchased SLIMdri units for its home office facility. Since installation, Ream has seen positive results. In addition to the 90-day return on investment, he estimates that the SLIMdri units have saved 50 percent on the day-to-day costs of maintaining and supplying the center pull units.

“Being in a mental health environment where we service so many people, the use of paper towels can be an issue,” he added. “When they’re dirty, they’re thrown around. They hit the floor and it is unsightly and unhealthy to have trash around. Our maintenance staff likes the fact that they’re less involved with the labor aspect associated with the use of towels. I think they’d put them in the hallways and in the kitchen areas if they could.”

Moving forward, Ream plans to expand the use of World Dryer hand dryers at the Community Counseling Center facilities under his supervision, as well as in planned building additions.

This video spotlights some of the features of the World Dryer SLIMdri model.