Motorist group weighs in on red-light cameras (with related video)

Many local governments are embracing red-light traffic cameras. In California, the Sacramento Bee reports that more than 50 cities have set up red-light camera systems. Some California cities, however, including San Diego, El Cajon and South Gate, have discontinued using camera systems.

In the nation’s capital, District of Columbia officials plan to more than double the number of traffic enforcement cameras on city streets — adding 132 units to the current array of electronic eyes. The additional cameras equal the biggest expansion since the District began using cameras to catch scofflaws more than a decade ago.

Here are some responses from John Bowman, communications director of the Waunakee, Wis.-based National Motorists Association (NMA) to questions from GPN about traffic camera trends and enforcement. The NMA was founded in 1982 to combat the 55-mph National Maximum Speed Limit Law. After succeeding in that effort, the NMA expanded its focus to other key driving issues.

John Bowman: This is a hard question to answer definitively, since there is no good way to track this kind of activity. Based on what we’ve seen, it seems like a stalemate — for every municipality that adopts cameras, it seems like another is rejecting them.

Dozens of cities over the last few years, including large ones like Los Angeles and Houston, have chosen to pull the plug on red-light cameras. Yet, we see pockets of expansion, notably in Florida.

It’s worth noting that 15 states have banned cameras, either through statute or through court rulings. Find out more at this site. It’s also worth noting that in 30 local elections where camera initiatives have been on the ballot, the cameras have only survived once. This provides a fairly definitive indicator of how the public views ticket cameras. 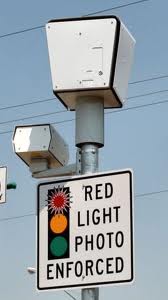 GPN: Are the cameras mainly used to boost revenue?

JB: In a word, yes. Camera supporters will tell you that cameras are not about the money, they are about safety. Yet, if safety were the goal, policymakers would implement traffic-engineering solutions that have actually been shown to improve safety. Like lengthening yellow light durations, for example. A one-second increase in the yellow light time can reduce accidents by 40 percent and violations by 50 percent, according to the Texas Transportation Institute. See here and here.

The City of Loma Linda, Calif., lengthened yellow-light durations at its camera-equipped intersections and achieved a 92 percent reduction in red-light running. See the results here.

The relationship between yellow-light timing and red-light running is well understood, but ignored by those who profit from the high violation rates made possible by the inadequate yellow times.

Despite what their supporters claim, red-light cameras do not improve intersection safety. The majority of independent studies and analyses (meaning those that are not sponsored by the camera companies or the public entities that use the cameras) show that cameras increase intersection accidents. For details, go here.

A Washington Post analysis found that accidents more than doubled at camera-equipped intersections.

GPN: How do you explain the staying power of red-light traffic cameras?

JB: In the end, why do red-light cameras persist? I believe it is because they are extremely profitable for the communities that use them and the companies that supply the equipment and management of the programs. For example, single red-light cameras in Chicago and Oakland, Calif., have generated up to $3 million in fines annually, and the Chicago camera program has produced $375 million in revenue since 2003. Those dollar amounts are nothing to sneeze at.

GPN: Thank you John Bowman, for your views.

Red-light traffic camera video from the Sarasota, Fla., police department was used to determine who was at fault in a motor vehicle accident.