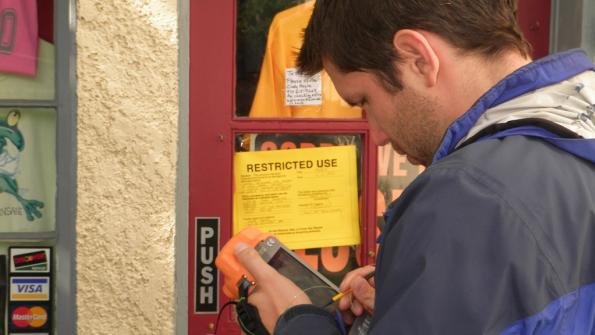 Juniper Systems recently loaned 10 of the company’s Mesa Rugged Notepads to officials in Colorado to be used for disaster management following the recent flooding in that state.

Logan, Utah-based Juniper Systems recently loaned 10 of the company’s Mesa Rugged Notepads to officials in Colorado to be used for disaster management. The recent flooding has resulted in significant damages that need to be assessed and reported.

Officials in Colorado are using the Mesas loaded with Esri software to conduct damage assessments. Building officials and deputized engineers inspect buildings, assess the damage and record the data with the Mesa. The officials then color-tag the buildings according to the extent of the sustained damage.

A red tag indicates that the property is severely damaged to the point that it is uninhabitable. A yellow tag specifies that a building has been moderately damaged to the point that its habitability is limited. The meaning of a green tag can vary at local levels, but generally it indicates that a building is either undamaged or has suffered only slight damage. The damage assessments are used for multiple purposes, including disaster relief funding requests.

“We feel deeply for the people of Colorado during this time of disaster,” said DeVon Labrum, vice president of sales and marketing at Juniper Systems. “We were happy to loan several of our Mesa units to help with their cause. The updates that we’ve received from officials there indicate a positive experience with the Mesas. It’s good to know they are able to make significant progress using our rugged handhelds. We hope for the best for everyone affected and wish them a rapid recovery from this disaster.”

Officials in Colorado have found that they are able to color-tag buildings at a faster rate using the Mesas. They will continue to use the loaned equipment from Juniper Systems until the necessary assessments are finished.

The Mesa Rugged Notepad is used for data collection and other applications. It has a 5.7-inch display to ensure easy readability and navigation. The handheld withstands extreme environments; it has an IP67 rating and is tested to MIL-STD-801G.

This video shows how a single Mesa rugged handheld computer was tortured over the course of a year. This is a compilation of highlights.