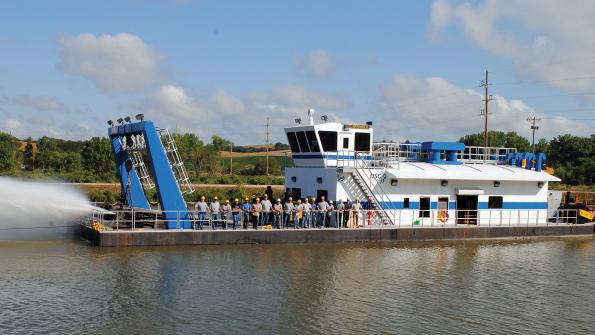 The district is a public power electric utility that serves a four-county area in the east-central part of Nebraska. The district is a political subdivision of the state of Nebraska, and has its headquarters in Columbus, Neb. It provides electricity for about 19,000 residential and commercial customers in a four-county area. To generate power, the district relies on two hydroelectric plants powered by water from the Loup River.

A diversion wall in the river redirects a portion of the water into a 35-mile canal system that carries it to the hydroelectric plants and reservoirs before returning it to the Platt River just beyond where it merges with the Loup River. The first two miles of the canal, known as the Genoa Headworks, contains a de-silting operation consisting of a settling basin and the Pawnee II dredge.

“Dredging is a very important part of the operation. If we don’t keep those two miles of channel open and get water into the canal like we’re supposed to, we lose all of the generation at our two hydroelectric plants,” says Kendall Christensen, operations manager for the Loup Power District.

A total of 14 district employees work at the headworks, with eight assigned to the dredging operation. The dredge constantly faces into the flow of the water so that the dredging operation begins on the downstream end of the basin and proceeds upstream. Between 1 and 1.5 million cubic yards of sand and sediment are removed from the settling basin annually. During the two operating seasons, the dredge must continually remove materials from the basin 24 hours per day, seven days per week to prevent any sand or sediment from building up and passing through to the power generation plants. In the adjacent photo, an operator is at the controls of the new dredge.

“The river water is heavy-laden with sand and sediment from runoff,” says Brad Morton, hydro superintendent for the Loup Power District. “In the 2-mile settling basin where our dredge operates, the pumping stations are placed about 300 feet apart on both sides, allowing the dredge to move up and down the basin.”

The Loup Power District’s new dustpan dredge offers technological and structural upgrades and improvements to the district’s operations. The upgrades include:
•    The PLC-based control system (programmable logic controller) allows for simple, user-friendly computer-directed operation.
•    The system records and displays operating hours for all of the major equipment on the dredge—pump, cutter, swing/positioning winches and ladder winch—which helps to track usage and schedule maintenance.
•    The 3,000-horsepower pump motor with a variable frequency drive allows the operators to easily adjust dredge pump speed to accommodate material conditions and required feed rates.