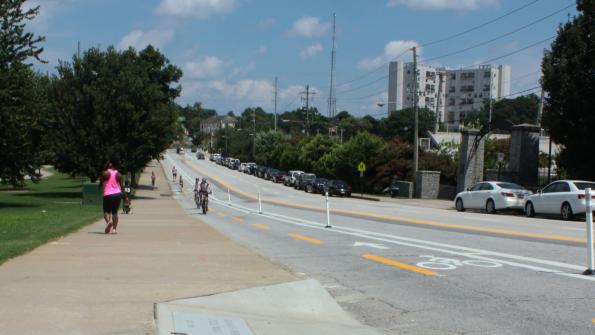 Earlier this month, Atlanta’s first two-way protected bike lane opened on 10th Street along Piedmont Park. The new track is a part of the "Connect Atlanta Plan" to double both bike lane mileage and the number of cyclists in the city by 2016.

Atlanta, a city famous for its traffic-clogged streets and limited public transportation options, has taken another step in becoming more bike-friendly.

The 10th Street cycle track, a two-way, protected bicycle lane running the length of one of the city’s biggest parks and connecting two major bicycle conduits, is expected to be completed early this month. The trail, aside from giving cyclists a safe route between the Beltline Eastside Trail and the Charles Allen bike route, is part of an ongoing effort to attract the next generation of innovators to the city.

Georgia Gov. Nathan Deal supports building bike trails, according to the online news source, the Saporta Report. Deal reportedly told a group of state business leaders recently that bike trails help attract research, development, venture capital and innovation to communities. “They like to be able to ride bicycles to work,” Deal told the group, according to the report. “So when I ask the [Georgia Department of Transportation] to build bicycle trails, don’t think I’ve lost my mind.”

The Report says that national and local studies support the idea that people are giving up their personal cars for alternative transportation, including walking, cycling and mass transit. Driving in the U.S. reached its peak in 2004, and has been on the decline ever since.

Reacting to these shifting trends, the 10th Street cycle track is part of the greater “Connect Atlanta Plan.” Spearheaded by Mayor Kasim Reed, the plan seeks to double the amount of both cycle commuters and the miles of bicycle lanes by 2016, according to a statement from the Mayor’s office. This spring, the city allocated $2.47 million in remaining bond funds to high-priority bicycle projects.

Rebecca Serna, executive director of the Atlanta Bicycle Coalition, told American City & County the 10th Street cycle track is the first of many projects. Later this summer, Ponce de Leon Ave. alsowill be fitted with a protected cycle track, as well as Peachtree Center Ave., among others. Because of the various projects, “we’ll hopefully be seeing a lot of additional bike traffic,” she says.

“We have over $62 million in planned transportation projects that will include the addition of new bicycle facilities over the next three years,” says Joshua Mello, the city's assistant director of planning for transportation in a published statement.

In her column, Maria Saporta says The Connect Atlanta Plan is a way to address livability problems, rather than only alleviating traffic, as the city has been doing for the past decade.

She says the communities that attract the individuals Deal seeks are livable — “places where [innovators] can walk, cycle, hop on a streetcar, light rail, a city bus, or work from the coffee shop down the street from their apartment or condo.”

“Riding safety for cyclists continues to be a top priority for my Administration,” Reed says in a statement. “Creating new, family-friendly bicycle routes for our citizens and visitors demonstrates our commitment to improving the quality of life for our citizens and creating a sustainable future.”