The Beacon Hill Food Forest will be a free source of fresh produce for the area’s working-class residents. 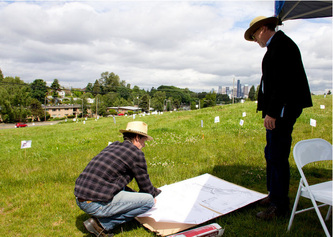 The modern age may have stifled the practice of gathering grubs and berries, but the ancient art of foraging remains alive and well – at least in Seattle, Wash.

Seattle’s new project, The Beacon Hill Food Forest, is slated to be a seven-acre expanse of fruit bearing trees, annuals and perennials, just minutes from downtown. The idea, according to National Public Radio’s The Salt blog, is to give the working-class residents of Seattle’s Beacon Hill neighborhood access to free, healthy food while adding a level of sustainability to the area.

A “food forest” is a land management system that mimics a woodland ecosystem but substitutes in food-producing plants. Companion plants are included to attract insects for pest management, and other plants are added help enrich the soil.  The ecosystem is able to yield high volumes of food with little maintenance, according to the project’s website.

Seattle Public Utilities offered the lot for the project, and it is funded through grants and private donations. Friends of Beacon Food Forest is now working with $100,000 in seed money to set up the first 1.75-acre test area, to be planted by the end of the year. If the city deems the project successful, planting will progress on the entire seven acres, according to The Salt.

The location of the forest is prime due to the land’s natural slope and sun exposure. These elements will nurture a large variety of plants and allow the forest to grow foods from different climate zones. Friends of Beacon Hill Food Forest hope this will encourage gardeners of different ethnicities to participate in the project.

One of the draws of the food forest, according to Wired, is that it will be self-sustaining. Through the relationships between the park’s trees and plants, the area will be renewed with edible vegetation every year. Plans will include apples, berries, herbs, root vegetables, pineapples and guava.

There are concerns that residents may become greedy in their harvesting of the forest’s free bounty, but Glenn Herlihy, a steering committee member of the project, said they will try to plant enough to satisfy everyone’s needs.

For now, Herlihy and his team’s primary ambition is to gain the support of the neighborhood. “It’s a food system being developed in a neighborhood that’s looking for more self-reliance,” he told The Salt.