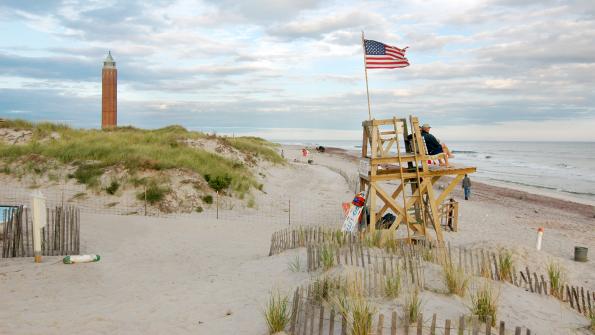 Beach parks damaged by Hurricane Sandy will be open in time for Memorial Day Weekend.

Surf’s up, everybody. Despite the damage caused by Hurricane Sandy last October, all New York State-run parks and beaches on Long Island are expected to open by Memorial Day weekend.

Although battered by the "superstorm," which did tens of billions of dollars in damage along the costal areas of New York and New Jersey, The Long Island Press reports state officials are saying all recreational areas will be open in time for the unofficial start of summer.

“Our parks and beaches on Long Island are the escape that people need,” New York State Parks Commissioner Rose Harvey said in a statement. “Sandy caused a lot of destruction, but our crews and contractors are fiercely working to get us in great shape to kick off the summer.”

In 2012, more than 18 million people visited state parks and beaches on Long Island according to a Long Island Press report. These visits are a driving force in the local economy, a force business owners and government officials worried would be weakened by the storm’s destruction.
According to a study released by the Political Economy Research Institute of the University of Massachusetts, visitors to America’s state parks bring up to $1.9 billion into communities annually. Of the $1.9 billion, the Long Island region accounts for the second highest total — $410 million dollars every year.

“Our parks and beaches are not only popular destinations for vacations, but they are also important economic drivers for our communities,” New York Gov. Andrew Cuomo told the Long Island Press. “We will continue to work diligently to ensure that these great assets are in safe and good condition for visitors to enjoy this summer.”

The New York Parks Department has funded reconstruction efforts, but officials expect to be federally reimbursed, according to the Long Island Press report.

The boardwalk will be open at Jones Beach State Park, but there will be certain areas with temporary railings. Repairs to fishing piers and the Boat Basin are also ongoing, according to Hauppauge.patch.com