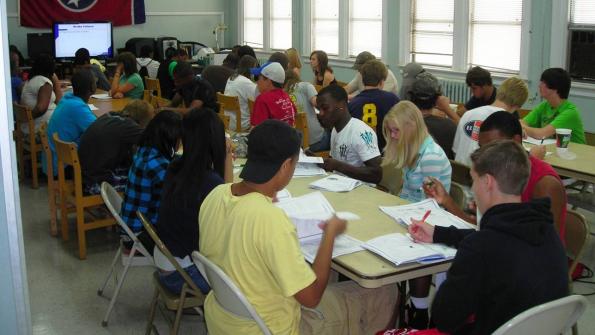 In the early 2000s Chattanooga was faced with two traffic safety issues for which there were no easy solutions: 1) An arterial street was experiencing a dramatic increase in the number of serious injury and fatal accidents, and there were no cost-effective ways to improve/rebuild the road. 2) Efforts to restart a long-dormant public driver education program were stalled due to a lack of funding.

The one-mile section of Hixson Pike is a four-lane, undivided street with several tight reverse "S" curves. Between 2000 and 2003, there were four fatal accidents with eight fatalities on Hixson Pike, all involving young drivers. The crash totals peaked in 2001 at 100 accidents.

Because many of the accidents were speed or weather-related, Hixson Pike was repaved with high friction asphalt in 2003. The repaving reduced the crash rates, but speeds remained high and accidents continued at unacceptable levels.

To address the speeding problem, city leaders decided to develop a city-wide photo enforcement program with Hixson Pike being the first site to receive speed-enforcement cameras. To gain public support, a key element of the establishing ordinance included a requirement that "all revenue generated by the program be used only to cover the costs of running the program and to support traffic safety education, engineering, and enforcement programs."

The speed cameras were installed in July 2007 and had an immediate and positive impact in reducing speeds and crash rates. The first year saw a 90 percent reduction in the number of citations issued. In 2010 only two minor collisions occurred.

In 2005 an effort to reintroduce driver education into the public schools was struggling to find a sponsor. Driver training was dropped in the schools in the early 1980s, and several grassroots efforts to restart the program had failed. A dependable funding source was needed.

It was an easy and logical decision to propose that revenue generated by the Photo Enforcement Program be used to support the Driver's Ed Program. Chattanooga contracts with a private drivers' training company to provide classroom and behind-the-wheel instruction. Classes are held in city recreation centers.

The city's Driver Education Program began in November 2009 and the response has been overwhelming. In three years, the program has graduated more than 1,400 students. The classes are offered year round and, to date, every course has been filled to capacity.