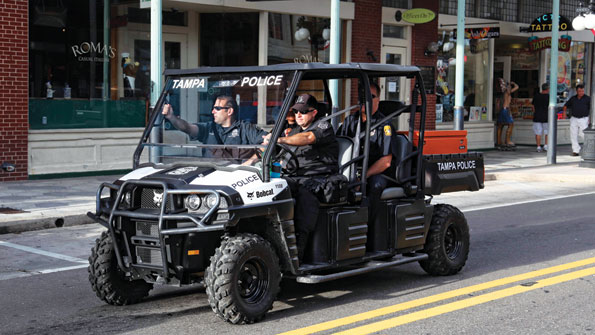 The 2012 Republican National Convention (RNC) required an unprecedented scale of crowd management. As part of its plan to protect the public, as well as its own human and canine security forces, the Tampa, (Fla.), Police Department integrated a variety of transportation methods, including 13 newly purchased Bobcat 3400XL utility vehicles (UTVs).

The department diversified its patrol approach through a combination of two- and three-wheeled personal electric transporters, horses, bicycles and UTVs. Officials dedicated eight of the 13 UTVs to delivering commanders, supervisors and supplies to downtown posts. Equipped with rear cargo boxes that could accommodate kennels, five units were used for canine deployments. "We had to use dogs in the security footprint, so the ability to move them back and forth out of the heat and give them a work/rest cycle was paramount," Bennett says.

The small utility-type vehicles previously used for special events were not up to the task, so with funds from a U.S. Department of Justice grant, Tampa purchased the new vehicles.

The UTVs proved responsive in a convention environment made more challenging as feeder bands from Hurricane Isaac hit the city and fear of the Category 1 storm cancelled the convention's opening day, Bennett says.