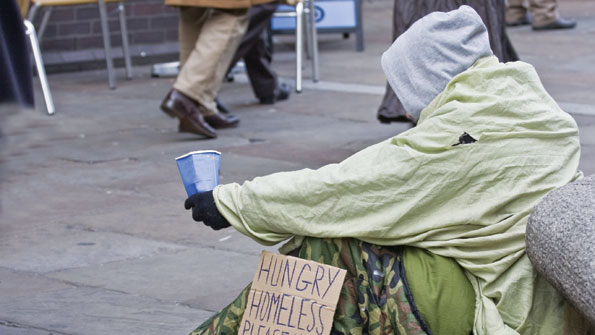 Cities and counties struggle with band-aid solutions to a national problem.

The national problem of homelessness continues, and cities and counties are increasingly impacted. But the tough economy has left local governments without the resources to address the problem, with critics saying some governments instead revert to treating the symptoms.

Media reports often highlight local ordinances that limit what people can do in public places, which some see as targeting the homeless. For example, Denver made urban camping illegal, and Philadelphia banned feedings in public parks, although the Philadelphia ordinance has been put on hold. Las Vegas has restricted the presence of pets on the Strip except between the hours of 5 a.m. and noon, essentially eliminating the practice of homeless people using their pets for panhandling.

Restrictive ordinances are a bad idea, says Neil Donovan, executive director of the Washington-based National Coalition for the Homeless. “Criminalizing homeless behavior is a short-sighted and ill-advised approach,” he says. “It tends to send homeless people into a game of musical chairs, where it is likely they will be sitting on your doorstep when the music stops.”

Donovan says people are experiencing homelessness for longer periods — sometimes years rather than months. The average period of homelessness has increased from 45 to 60 days.

The U.S. Housing and Urban Development (HUD) budget for the homeless is about $2.4 billion. However, Donovan says it would take $20 billion or more per year for at least three years to build enough affordable housing, create jobs and close the gap between income and the cost of housing.

Donovan says some cities handle the problem better than others. He mentions Boston as an example of a holistic approach to address homelessness, which he says doesn’t cost any more than treating the symptoms. For example, social workers are assigned to Boston public libraries to address the needs of the homeless and as act as liaisons between the homeless and the larger population.

Some local jurisdictions may have come in for unfair criticism. For example, media reports characterized some policies of the Newport Beach, Calif., Public Library — such as restrictions on parking shopping carts or bikes outside — as targeting the homeless.

That was not the intent, says Cynthia Cowell, library director. “We do not have a homeless problem. We have homeless people who come in here, but they are not a problem by and large. They are just like every other library customer.”

Cowell says requirements that wheeled conveyances, such as bicycles and shopping carts, be parked at a bicycle rack rather than in front of the building are not directed at homeless people, who often use such conveyances to store and transport their belongings. But Cowell says even some expensive bicycles had previously been parked in front of the building and scratched the marble fascia near the front door, which led to the rule.

Unattended packages are restricted as a security concern, Cowell says. There is also a library rule about people who have a strong odor, whether because of poor hygiene or heavy perfume, but it is only enforced if another library patron complains.

The library board in the affluent community recently prohibited customers reclining on furniture in the facility. That was not because of a particular problem but in response to a library patron who pointed out there was no such restriction in place.

Donovan, the homeless coalition director, says laws that treat everyone the same are easier to defend as not anti-homeless. For example, if a jurisdiction enacts a restriction on requesting money on the street, it should also apply to fundraising by firefighters or Girl Scouts, and even to Salvation Army holiday bell-ringers, he says.