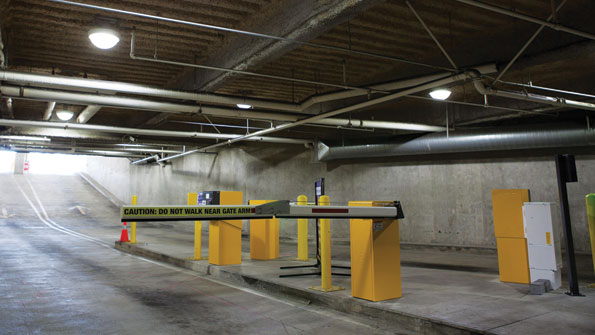 Oakland has been recognized as a top ten green and sustainable U.S. city eight times. Now, the city is reducing its own energy use in municipal operations, such as the recently renovated Dalziel Garage.

Wentworth and his team tested seven manufacturers' LED luminaires and reviewed photometric performance for each, ultimately selecting Gurnee, Ill.-based Kenall. In February, the structure was retrofitted with 180 80-watt LED luminaires with a color temperature of 5000K. Although the project was primarily a one-for-one replacement, the city relocated some fixtures and added others in dark spots to make the light more uniform. "Through a slight but strategic increase in fixtures when compared to the original layout we found that we could ultimately reduce the overall energy consumption to further enhance the project's sustainability and payback," Wentworth says.

While the improved LED light quality makes drivers feel more secure, the new fixtures are consuming approximately 80 percent less energy than the previous MH lights. The city anticipates a $31,667 reduction in annual energy costs for all lights, including control and emergency systems, and a return on investment within 7 years. It also expects to consume 263,700 kWh less energy per year.