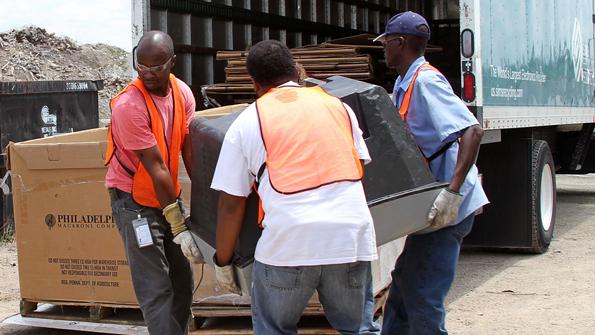 Grand Prairie, Texas, began collecting and recycling electronic waste more than seven years ago, and over the last few years, residents have been bringing an increasing amount of electronics to the city’s landfill for recycling. Grand Prairie’s electronic waste recycling program was modest at first, taking only computers. Over time, the city added televisions, VCRs and DVD players, as well as printers, copiers and fax machines. The city charged residents for certain items, but the city’s costs to provide the service were growing larger.

In February, Grand Prairie contracted with Chicago-based Sims Recycling Solutions to operate the electronics recycling service for the city for one year, with the option for renewals. The contract does not cost the city any money and is actually generating some revenue.

Now, residents can drop off their electronic waste six days a week at the city landfill for no charge. Acceptable items include nearly everything with a cord — curling irons, hair dryers, even microwave ovens. A separate vendor handles large appliances.

Attendants employed by the company collect the items from residents and support Grand Prairie’s public outreach and environmental education efforts by explaining to residents why it is important to recycle electronics and how their devices are recycled. Twice a month, a driver from the company’s Dallas facility picks up the city’s electronic waste.

In addition to diverting tons of electronic waste from its landfill, the county gets a per-pound rebate from Sims for computer equipment. The additional revenue helps fund other recycling programs. “Grand Prairie has a goal of keeping electronic waste from being buried in the landfill,” says Ruthie Bracken, operations supervisor for the city’s Environmental Services Department. “We now have a collection program that benefits the city, the residents, and the environment.”