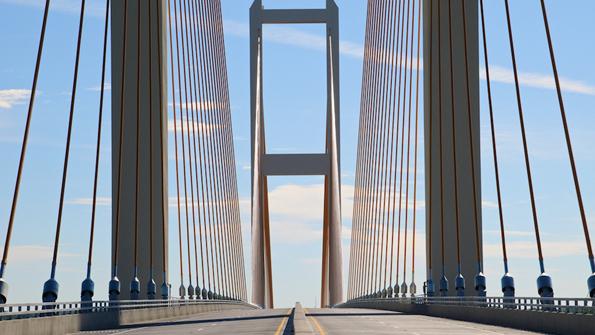 In January, the Louisiana Department of Transportation and Development (DOTD) officially opened the John James Audubon Bridge over the Mississippi River. The only bridge over the river in the 90 miles between Baton Rouge, La., and Natchez, Miss., the Audubon also is the longest cable-stay bridge in the Western Hemisphere.

The $408 million bridge was built as part of the state’s Transportation Infrastructure Model for Economic Development (TIMED) Program, which was created by an act of the Louisiana legislature and approved by voters in 1989 to enhance economic development through an investment in transportation projects. The $4.6 billion program includes widening 536 miles of highways on 11 corridors, widening and/or building three major bridges, and improving the Port of New Orleans and Louis Armstrong International Airport.

The Audubon Bridge was built to provide a river crossing between West Feliciana Parish/St. Francisville and Point Coupee Parish/New Roads, an area previously served only by ferry. The bridge improves evacuation route options, offers better north-south access for the trucking industry, and connects the nearby communities like never before. “The Audubon Bridge is a great asset to both the communities of West Feliciana and Pointe Coupee,” says St. Francisville Mayor Billy D’Aquilla. “The two communities, having different cultures, will now be able to grow economically together and support one another.”

Major elements of the 14.6-mile project include a four-lane, 1,583-foot main span bridge, and 12 miles of connecting roadway between the structure and LA 10 and U.S. 61. Each of the bridge’s 136 cable stays is anchored to a 500-foot tower, which provides support to the bridge deck.

Construction began in 2006, and the Louisiana DOTD opened the bridge to limited traffic in May 2011 after Mississippi River flooding forced the closure of ferry service. Lane closures allowed the bridge to remain in service during the remainder of construction until the bridge was fully opened in January 2012.