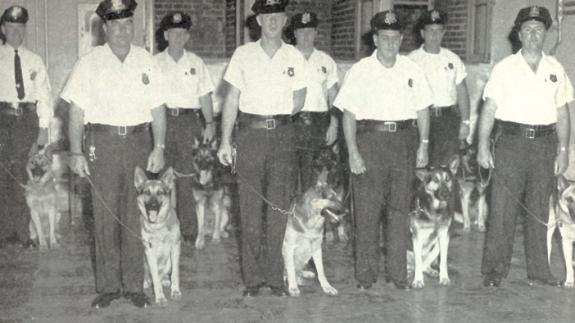 One of The American City’s first reports on police dogs appeared in an October 1957 article by James Hepbron, Baltimore’s police commissioner. According to the article, the idea for adding the dogs to the police force came from residents, who read a 1956 newspaper series about Scotland Yard’s police dogs in London. A veteran of the U.S. Marine’s K-9 Corps volunteered to start the city’s training program, and one man offered the use of his German shepherd. Soon, a patrolman donated a second dog and asked to be assigned to the corps. The department expanded the K-9 unit with six more donated dogs in January 1957. In their first year, Baltimore’s police dogs participated in 175 arrests, and “almost daily police officers report that fugitives immediately give up any idea of fleeing at the sight of a dog.”

Two years later, Baltimore’s K-9 Corps included 21 trained dogs, according to a November 1959 American City report. The officers that worked with the dogs had to volunteer for the job and were charged with caring for the dogs at all times. The department required that its dogs were male German shepherds with an even temperament. They were trained first in obedience, then in attack work, and then to locate lost persons, criminals and evidence.

Word of Baltimore’s successful experiences with police dogs soon spread, and the department trained other departments to establish their own K-9 units. The May 1962 edition carried a report on Lancaster, Pa.’s decision to start a K-9 Corps after officers visited Baltimore in 1959. Lancaster modeled its unit after Baltimore, asking residents to donate dogs to the corps, and selecting six handlers from among police volunteers. The Baltimore Police Department trained one of Lancaster’s officers, who then trained the five additional handlers. They built obstacles and trained the dogs to climb ramps, crawl through pipes and jump barriers. Lancaster officers soon discovered that not every donated dog would be suited for police work. One of its early lessons: “A dog, to be effective in police work, must be a ‘people-biter.’”