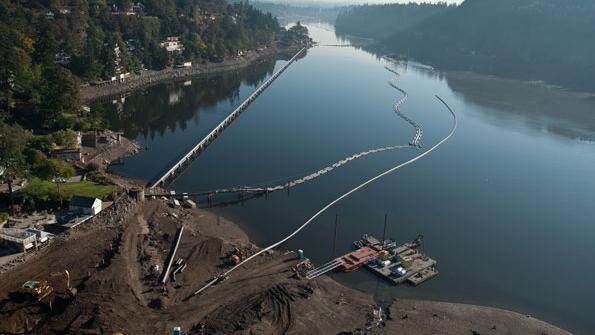 Lake Oswego, Ore., officials faced a daunting challenge: how to replace an undersized, corroding and seismically vulnerable pile-supported interceptor sewer in a popular lake. The solution became the world’s first buoyant gravity sewer, which was completed last summer and is accommodating the town’s growth while keeping the lake clear for recreation.

The Lake Oswego Interceptor Sewer was originally constructed in the 1960s to handle sewer flows from about 3,500 developed acres. That grew to a 4,500-acre service area without an increase in pipe size, and as a result, prolonged periods of rain would cause the system to back up and flow out of manholes into the lake or onto streets near the lake. Additionally, much of the concrete cylinder pipeline in the main portion of the lake was supported on steel piles, which were corroding and not likely to survive a moderate earthquake.

In 2002, city officials evaluated alternatives to correct the deficiencies. In August 2007, after many public hearings and community briefings, the city council recommended replacing the system with a combination of pile-supported pipe close to shore and a buoyant, gravity flow pipeline in deeper waters mid-lake. Designed by Walnut Creek, Calif.-based Brown and Caldwell, the in-lake gravity sewer eliminated the need to build six pumping stations and install nearly twice as much pipe for a system located on land.

Work began in January 2009, and crews faced numerous challenges, including completion of the project without interrupting a summer boating season. The resulting centerpiece of the Lake Oswego Interceptor Sewer is a nearly 2-mile reach of buoyant high-density polyethylene pipeline held beneath the lake surface by flexible wire rope tethers fastened to steel ground anchors grouted into solid bedrock beneath the lakebed. Pile-support systems and cured-in-place pipe rehabilitation also were used for significant reaches.

Completed on time and under budget after a 10-year process, the system has performed well since coming online in June 2011. Peak wet-weather flows are now accommodated, and maintenance has been trouble-free. The $95 million project is financed through revenue bonds that are repaid through utility bills. The project received the 2012 Grand Prize for Design from the American Academy of Environmental Engineers in the 2012 Excellence in Environmental Engineering Awards program in April.

Watch a short Brown and Caldwell video about the project below: