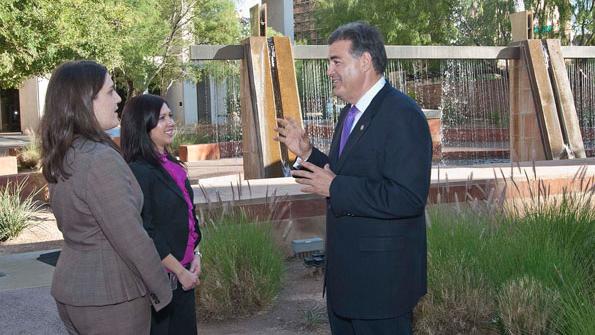 As the Baby Boomers retire over the next decade, many gaps will open in the government workforce. Local governments are preparing for the vacancies by expanding their talent pool through internship and fellowship programs that educate participants on how local government works and introduce them to careers in public service. Equally important, they help cities and counties recruit, train and retain talented professionals, as well as address hard-to-fill job openings.

As the Baby Boomers retire over the next decade, many gaps will open in the government workforce. Local governments are preparing for the vacancies by expanding their talent pool through internship and fellowship programs that educate participants on how local government works and introduce them to careers in public service. Equally important, they help cities and counties recruit, train and retain talented professionals, as well as address hard-to-fill job openings.

Local governments are smart to ready themselves for the exodus. Some 70 percent of city, county and town managers are now age 40 and older, according to the Washington, D.C.-based International City/County Management Association (ICMA). “It’s just the Baby Boomer bulge moving through,” says Michele Frisby, ICMA spokesperson. “It’s those same people who were under age 40 in 1971. We’re going to need to replace those individuals, particularly over the next 10 years.”

Programs vary in length from a summer or academic semester up to two years. Most are unpaid learning opportunities, while a few offer full-time paid employment for a specific period.

Phoenix has one of the longest-running internship programs in the nation. Since 1950, its Management Internship Program has trained more than 171 participants. The list includes current City Manager David Cavazos and other top-ranking members of his management team.

“You can look through this organization and see so many people in such key management roles that came through the program,” says Lisa Esquivel, Phoenix’s deputy human resources director. “It’s such a great pipeline for talent. As the workforce waxes and wanes, we’ll always have this pipeline and have great talent.”

ICMA provides internships for undergraduates in local governments across the country, in partnership with Wittenberg University in Springfield, Ohio. The group also places recent master’s degree graduates in management track positions with local governments through its fellowship program. Since its start in 2004, six of the 96 participants who have completed ICMA’s Local Government Management Fellowship have landed manager or deputy manager positions, while others have secured senior-level positions.

Joe McRae, now a deputy city manager for Evanston, Ill., a suburb north of Chicago, graduated from the program in 2006. “[The ICMA program] gave the opportunity to learn from some of the best people in the world,” McRae says. “It’s made all the difference in the world.”