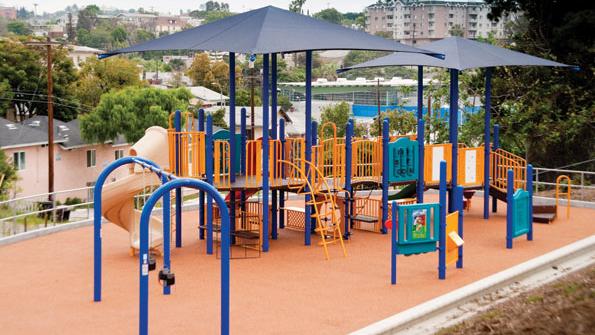 Residents continue flocking to parks, especially in a tough economy. Although many cities have witnessed an increase in park visitors, that does not translate into added funding. Despite tight budgets, some parks departments are finding creative ways to continue adding parks.

For fiscal year 2009, the most recent figures available, average parks and recreation budgets in the nation’s 100 most populous cities were relatively flat compared to 2008, according to the Trust for Public Land’s “2011 City Park Facts” report. Still, 35 of the cities added 120 parks.

The Los Angeles Department of Recreation and Parks has maintained its $180 million budget, but now has to pay $40 million per year in utilities and overhead, among other expenses, that used to be paid by the general fund, says Superintendent Mike Shull. The city, however, plans to add 50 parks during the next two years. The Los Angeles Housing Department has obtained distressed properties using Department of Housing and Urban Development stimulus money and is turning some of them over to the parks department for conversion. Although his department’s budget is tight, Shull says that if the city did not take advantage of the available grants and cheap land now, it could be many years before it would have the same opportunity.

The Bakersfield, Calif., Recreation and Parks Department has experienced a slight increase in its budget over the past couple of years. Last year, it opened five new parks using state grants, local park development fees and money from the general fund, and securing naming rights from State Farm for the first phase of a sports complex. “Having partnerships and naming rights is the future of many cities across the U.S.,” says Dianne Hoover, the city’s director of parks and recreation.