Pittsburgh 911 dispatchers are expecting a few calls from citizens concerned about gunshots and explosions from the filming of the new "Batman" movie. 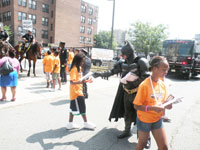 It’s not Gotham, but Pittsburgh is about to see some epic battles between the legendary comic book hero Batman and the bad guys. And, the city’s police department and emergency dispatchers are preparing for quite a few concerned phone calls in response to the Hollywood-generated gunshots and explosions that will result, according to the Associated Press (AP).

Several scenes for the latest Batman movie, “The Dark Knight Rises,” are to be filmed at various Pittsburgh locations over the next few days, and despite many reports about the filming in the local media, officials expect there may still be some confusion. However, that does not mean residents should just ignore the faux chaos, says Allegheny County Deputy Emergency Management Director Raymond DeMichiei. “If you hear shots fired or a disturbance or gunfire … call 911 and report it, and we’ll figure it out,” DeMichiei said in a message to residents.

Traffic will be affected, too, as some streets will be closed for filming and so crews can put down fake snow for some scenes, according to AP.