GIS comes to the rescue 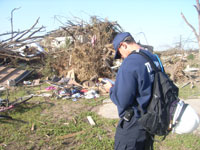 As East Coast and Gulf Coast communities brace for hurricane season, officials in Miami-Dade County are ready to use their new GIS application that lets them quickly map and locate employees during emergencies. The employee locator is a pilot project of the county’s Enterprise Technology Services Department (ETSD), General Services Administration and Department of Solid Waste that began last fall. Users can search by employees’ names, identification numbers, job titles and zip codes to quickly contact the employees who can respond the fastest to a crisis. “The ability to just go into the system and with a couple of clicks identify an individual who can be dispatched to a particular location because he lives close to it is enormously valuable,” says Jerry Hall, Miami-Dade’s division director of Facilities and Utilities Management. “When you’re able to do that, you can respond in less time, and you may save a situation before it gets out of hand.”

Speed also is the focus of the Virginia Department of Emergency Management’s (VDEM) innovative GIS-based platform called Virginia Interoperability Picture for Emergency Response (VIPER), which launched in 2008. VIPER contains static data — such as the location of schools, homes, hospitals and roads — and more than 100 live data feeds from sources including the National Weather Service, the Department of Transportation, the 911 system and satellites. With the combination of static and live data, officials can go to one source to get details about conditions on the ground in real time, says Michael Nelson, VDEM’s deputy director of operations.

VIPER’s usefulness was demonstrated in April when tornadoes ripped through the state. Instead of having to gather reports from five different National Weather Service offices, Nelson says, VDEM staffers captured weather information through VIPER and quickly notified emergency officials hours ahead of time about more impending storms.

In Tennessee, following an April 27 tornado, Hamilton County’s GIS professionals launched a project to gather tornado damage reports from residents online so the GIS department could map the destruction. About 300 residents responded, entering their addresses and the type of storm damage they experienced, says GIS Manager Greg Butler. Chief of Emergency Management Bill Tittle says the website helped his staff gather damage reports from the more isolated parts of the county.

Tittle encourages emergency officials to work closely with GIS departments. “GIS professionals have so much data,” he says. “They’re creative, and they can generate the maps we use by what we tell them. They’ve done it so much now that they can anticipate what we’re going to ask.”