San Francisco's use of the low-flow toilets has cut city water consumption, but the reduction of water has led to a smelly build up of sludge in the sewer system. 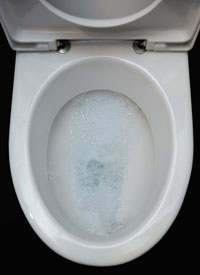 San Francisco’s well-intended effort to conserve water by using low-flow toilets has backfired in a very smelly and expensive way, according to the San Francisco Chronicle. The use of the low-flow toilets has cut city water consumption by 20 million gallons a year, Public Utilities Commission spokesperson Tyrone Jue told the Chronicle. However, because water flow isn’t pushing the waste through the sewer system fast enough, a stinky sludge is building up in the pipes, creating a rotten-egg smell in areas of the city, especially during summer.

In response, the city is spending $14 million to buy a three-year supply of concentrated bleach to combat the sewer odor, disinfect treated water before it’s pumped into San Francisco Bay and sanitize tap water. But, environmental advocates say the plan is “the equivalent of using a sledgehammer to crack an egg; it’s the wrong tool, and it will cause irreversible collateral damage.”

Instead, San Francisco chemical engineer Adam Lowry and German chemist Michael Braungart suggest in a Chronicle op-ed either dumping hydrogen peroxide into the sewers or “a pro-biotic solution, that is, enzymes or bacteria that would simply ‘eat’ the smell then degrade harmlessly.”