911 technologies are being simplified in preparation for next-generation systems.

The paper maps are gone. So are the Rolodexes, typed lists, CRT monitors and push-button phones. The workstations where many public safety call takers and dispatchers sit today are less cluttered, more capable and easier to use than their forerunners of 10 or 20 years ago. But, of course, there is still room for improvement, say emergency telecommunications professionals. And those systems at public safety answering points (PSAPs) will need to evolve even further when next-generation 911 (NG-911) technology becomes a reality. 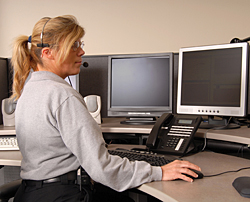 One of the best aspects of today’s PSAP workstations is the computer-based call-taking system, says Wanda McCarley, operations group manager for the Tarrant County, Texas, 911 District. For one thing, she says, it provides more information than older systems did, such as whether a caller is using a wireless phone with precise location data, or an older phone, which makes the location hard to locate.

Also, modern telephony systems make it much easier to transfer calls, she says. “The numbers are all programmed for their surrounding agencies, so if the call needs to be transferred, they can do that with one button.”

Rick Jones, operations issues director at the National Emergency Number Association (NENA), likes that vendors are starting to offer computer-aided dispatching (CAD) products that serve multiple PSAPs at the same time. That would allow eight rural counties, for example, to buy and share one system. “That brings in some economies of scale,” he says.

Throughout the 1980s and ’90s, CAD systems evolved to support PSAPs that serve numerous law enforcement, fire and medical agencies, each with their own particular requirements, Jones says. “The next leap was being able to do the same thing across a broader geographic area.”

In addition, call-takers and dispatchers today have many more options for viewing and sharing information. Although a crowd of monitors — typically anywhere from three to eight flat-panel screens per console — is still a fact of life, interfaces help some communications centers cut the clutter.

“If you think smart, you can use split screens and use one monitor to present two images,” says Steve Souder, director of the Department of Public Safety Communications in Fairfax County, Va. So, while the monitor linked to a call-taking system in the Fairfax center displays a caller’s location on a map, the other half of the screen shows an aerial photo.

Workstation flexibility also extends beyond the workstations themselves. In the multi-jurisdictional Fairfax County center, telecommunicators can push any text, map, photographs or other content displayed on a monitor to the 60-foot video wall operated by the Virginia Department of Transportation (VDOT). And, 911 personnel can access some video streams from VDOT’s wall at their workstations, giving them a close-up view of traffic incidents.

Logging and recording systems linked to call-taking systems also are becoming more sophisticated. “Every time the phone is answered off the work station, that call gets recorded, along with all the statistics about the call,” says Michael Grossie, executive director of the Lubbock, Texas, Emergency Communications District. Automatically capturing data regarding the call length, where they were transferred and other factors helps the center manage staffing, he says. Users also can easily locate and listen to recorded calls.

Although the systems on telecommunicators’ consoles are more integrated — or, at least, interfaced — some PSAP professionals would like to go further by eliminating redundant hardware.

“We’re working with a lot of separate technologies, although they are integrated and can talk on the back side,” says James Lucci, team supervisor at the North East King County Regional Public Safety Communication Agency (NORCOM) in Bellevue, Wash. Maintaining those technologies, such as the seven monitors on a telecommunicator’s console, gets expensive, he says. As the cost of larger monitors comes down, NORCOM plans to start displaying the same information on fewer screens.

McCarley agrees that telecommunications systems need to become more integrated. With as many as eight flat-screen monitors attached to different systems at the consoles in the Tarrant County 911 District, PSAP personnel face an ergonomic risk. “It causes dispatchers neck problems looking up and arm problems if they’re using touch screens,” she says. Some personnel in the district also contend with multiple keyboards and computer mice.

“It would be better if the integration were better, so that your CAD system or your 911 call-taking system could put all of that information into a limited number of screens, and you could display that information in an orderly manner,” McCarley says.

Besides reducing the clutter of displays and peripheral devices, combining call-taking, CAD, logging and recording, and other functions into a single system makes two kinds of economic sense, Jones says. For one thing, it’s bound to reduce maintenance costs. “I don’t need people trained specifically for five separate [systems],” he says. “I can have a really good person do the whole thing.”

Also, an integrated system would be simpler to fund. PSAPs often pay for different technology tools out of different budgets, Jones said. “If you put that all together and buy one thing, you can share funding sources.”

In Lubbock, Grossie’s biggest complaint about current technology involves session initiation protocol (SIP), the signaling protocol that controls voice over IP (VoIP) communications. “Each vendor has their own little flavor or version of SIP, and that causes problems, because one system can’t talk to the other,” Grossie says. “In Lubbock, I can’t send a voice-over-IP call to the system in Amarillo, 110 miles away, because they’re using equipment from a different manufacturer.” Vendors are working to eliminate that problem, but they have yet to succeed, he says.

The advent of NG-911 should make it easier to pass calls from Lubbock to Amarillo. But, PSAPs and their vendors still face many other challenges as they prepare for the transition to the new technology.

Massive amount of data for NG-911

Some of the most crucial issues concern the ability of PSAP systems to manage and present the vast volumes of data, text, photographs, video and audio that NG-911 will generate. “Next-gen has the possibility of just inundating our call-takers with information,” says David Jones, a vice president and principal at the public-safety consultancy Mission Critical Partners in Southlake, Texas. “Some of it may be useful, some of it not so much.”

PSAP operators must be able to decide which information they want to present to employees, Jones says. For example, in a large city, where first responders can reach the scene of an accident quickly, call-takers will not need all of the details that a car’s automatic crash notification (ACN) system can send. The excessive information might be more of a distraction than a help, Jones says.

But in a rural area, where it might take 30 minutes or more to get units to the scene of a car crash, the needs would be far different. “That information that I might get from ACN would be vital in determining how I would respond,” Jones says.

McCarley says that NG-911 systems should be configurable enough to present the volume and type of information that employees in a particular PSAP need to perform effectively. “You want them to have information they can use,” McCarley says. “And then if you have additional information, you’d like to put it someplace, and let them go get it if they need it, instead of throwing it at them all at once.”

Besides determining what information to present, members of the PSAP community are deciding on the formats that NG-911 systems will use to display that information. Currently, NENA and the Association of Public-Safety Communications Officials (APCO) are attempting to define requirements for the human machine interface (HMI) and displays used in NG-911 systems.

The goal is to create a standard appearance for incoming information. “For instance, there are all kinds of ways to do text messaging,” Jones says. “They all look different. We have a requirement that they look the same when they come in to the call-taker.” Videos, too, will adhere to one format on PSAP screens, no matter the source. Both NENA and APCO hope that the standards will keep NG-911 from imposing new burdens on call-center employees, he says.

The industry’s experience in making the transition from paper-based dispatching to CAD systems demonstrated the importance of carefully managing the implementation of new technology, Jones says. But if the emergency telecommunications industry gets NG-911 right, everyone will win. “The public is going to get better service,” Jones says. “And, the first responders going to the scene are going to get better service — things to help them do what they do, and to protect them.”

Merrill Douglas is a freelance writer for American City & County’s sister publication, Urgent Communications, which published this article in its November 2010 issue.