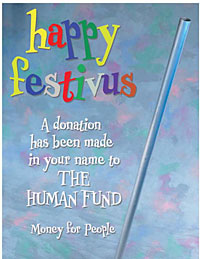 As this year’s holiday season got under way, Malcolm Alarmo King, a convicted drug dealer doing time in the Orange County, Calif., jail, decided it was time for his airing of grievances, in keeping with what he claimed was his traditional celebration of the semi-fictional holiday of Festivus. King claimed his belief in the “festival for the rest of us,” a creation of the television comedy “Seinfeld,” was justification for him to receive kosher meals while in the jail — a claim that held up, at least temporarily, according to the Associated Press.

King made the appeal for kosher meals because he disliked the salami meals served at the jail, even though keeping kosher is not one of the tenets of Festivus. Along with the airing of grievances, Festivus is supposedly celebrated by the display of an aluminum pole and, of course, the feats of strength. Orange County Sheriff’s spokesperson Ryan Burris says King got salami-free meals for two months before the county got the order thrown out in court.

Festivus has grown in popularity in the years since the “Seinfeld” episode aired, and some people actually have begun observing the holiday. Some companies even sell Festivus poles and offer Festivus greeting cards.