The Santan Vista Water Treatment Plant serving both Chandler and Gilbert, Ariz., was one of 11 winners of the 2009 America's Crown Communities excellence awards. 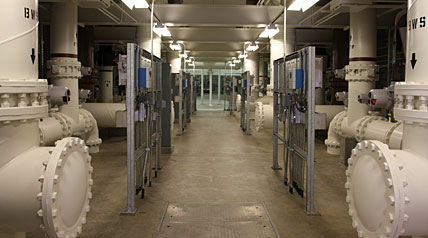 Gilbert and Chandler, Ariz., needed more water to support their growing cities, but budgets were tight, and both were struggling to maintain critical services. By working together, the neighbors have combined limited resources and constructed an $88 million water treatment plant.

Work on the project began more than 10 years ago when the two communities began evaluating water treatment technologies and delivery methods. A formal agreement and plans were signed in 2006, and construction broke ground in 2007 in Gilbert. Real property, plant infrastructure and raw water pipelines are jointly owned, with each city paying 50 percent of the construction costs. Each community is entitled to 50 percent of the plant capacity, which is 24 million gallons per day and will be expanded to 48 million gallons per day by 2014.

A 14-mile long, 48-inch diameter pipeline crossing three cities and two counties was constructed to carry raw water from the Central Arizona Project canal, which is surface water and snow melt from the Colorado River, to the plant. The new source supplements supplies each city receives from the Salt River Project canal system and groundwater wells, reducing reliance on groundwater and adding redundancy to the systems.

The Santan Vista Water Treatment Plant, which is staffed by Gilbert employees, treats the water using high-rate ballasted flocculation, which uses polymer and microsand to rapidly settle out particles, and ozonation to reduce taste and odor problems. The facility also includes a sodium hypochlorite generation system, which produces a bleach solution on site for chlorination, eliminating the need to store chlorine at the facility. Water lost during the treatment process is captured and put back through the plant, resulting in a 99 percent efficiency rate.

Funding for the plant came from system development fees, which are assessed one time for every new building constructed and are intended to help offset the growth-related costs incurred by the cities. The cities saved an estimated $22 million in capital investment by building one plant instead of separate facilities. Additionally, the cities will save an estimated $600,000 annually by sharing operational costs of staff, chemicals and electricity.